Remembering a life well lived: Kofi Annan on my mind 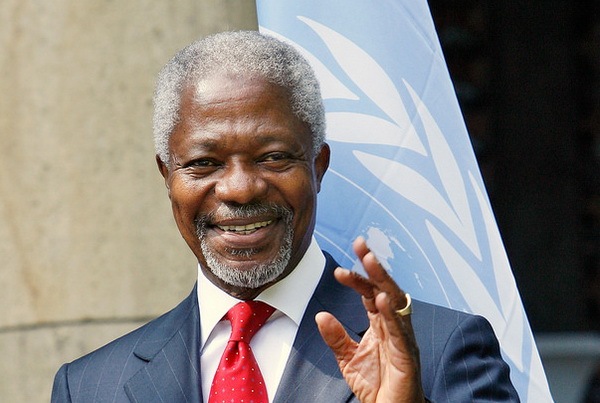 Here at the United Nations (UN) headquarters in New York, in the USA where I am currently covering the 73rd UN General Assembly (UNGA) Session underway, Kofi Annan’s name is etched in memory.

He continues to receive several heartwarming sentiments and statements all in his honour.

It was, therefore, refreshing to behold when last Friday, as part of the UNGA Special Commemorative Session in honour of him at the UN headquarters, a traditional Ghanaian cultural performance was held before the start of the formal plenary sessions. Indeed, by his sterling performance at the UN, the late Kofi Annan is not only a global phenomenon but has brought huge honour to Ghanaians.

“We the people” was the mantra of the late Kofi Annan, the former Ghanaian Secretary-General of the United Nations. Since his passing on August 18, 2018 and burial on September 13, 2018, the world continues to pay countless global eulogies, expression of sympathies and tributes to his memory, all of which go a long way to attest to the greatness and iconic figure of the man Kofi Annan.

Working on the diplomatic desk of the Daily Graphic many years ago, Kofi Annan’s name popped up in the early stints as I worked as a young journalist in the 1990s. Then relatively unknown, Kofi Annan came across to me as a Ghanaian lone star blazing the global trails working quietly but steadily at the UN in charge of peacekeeping duties. In the early 1990s, to even get a portrait of Kofi Annan to use to illustrate or complement a story was very difficult and one had to comb through a number of news magazines and periodicals to lay hold of such a picture. Today, the internet has made it relatively easier.

But following his meteoric rise and exploits in the affairs of the UN, it did not come to me as a surprise when he was appointed the Secretary-General of the UN many years later. Indeed, reporting and covering the global activities of Kofi Annan from the back stage, he could easily be singled out as a man with huge global promise. No wonder as the Seventh Secretary-General of the UN, he took the position very well prepared and led the global body with distinction.

Though Kofi Annan lived a better part of his life abroad and particularly at the UN when he was just over 20 years old, he also worked to raise high the flag of Ghana and needs to be celebrated. As a Secretary-General, Nobel Peace prize Laureate, global citizen and statesman, he may not have got it all right or wrong for mankind. But undoubtedly, his successes and achievements far outstripped that of his failures. Having lived most of his life at the UN, he served the UN and his country in various international assignments. Also, as an astute and experienced diplomat who served on the bureau of the Executive board of the UN and many international conferences, Kofi Annan is reputed never to have raised his voice to any one even if he was provoked and under extreme pressure. And as a top global negotiator, he rather preferred to use dialogue and jaw to jaw to resolve thorny and sticky situations and he succeeded most of the time.

With his passing, it is natural for the global community to feel overwhelmed and even have a fear of the unknown, but there are many useful lessons to learn from this illustrious gentleman, composed and calm son of Ghana. His passing must rather provide the opportunity to reflect and remember the global impact he had on the lives of others through his community, work and family engagements, services and involvements.

Ghanaians blazing the trail in UN

Thankfully, Ghana has also had some distinguished personalities, including the late Alex Quayson-Sackey, the first Black man to be appointed President of the UNGA, who had served the UN with distinction. Currently, there are some stars in the making, in the persons of Kwabena Osei-Danquah who has recently been appointed to a senior UN job in New York. As a former Director of the Division for Governance and Multilateral Affairs at the UN Population Fund (UNFPA), Mr Osei-Danquah has been appointed as the Chef de Cabinet of the incoming President of the United Nations General Assembly, Ms Maria Fernanda Espinosa, who until her election was the Foreign Minister of Ecuador. I cannot end this column without mentioning Ms Hannah Tetteh, a former Minister of Foreign Affairs, who has also been appointed the UN Special Representative in Kenya.

All of these Ghanaian efforts at helping to influence global politics and developments cannot but make one feel proud to be a Ghanaian.

Email:This email address is being protected from spambots. You need JavaScript enabled to view it.