VIDEO: Jim Iyke assaults actor who called him a ritualist 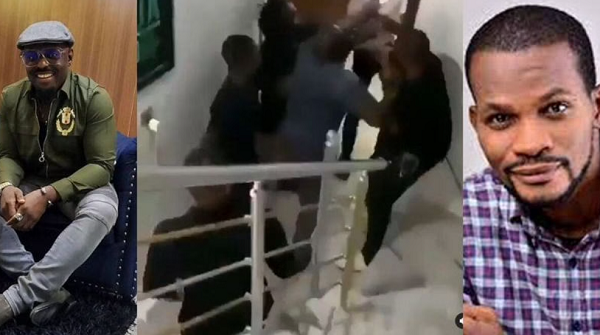 Uche Maduagwu and Jim Iyke end up in an altercation after the former questions Iyke's wealth (Images via Instagram and YouTube)
30.5k Shares

Nigerian celebrity Uche Maduagwu has landed himself in a physical fight with fellow actor Jim Iyke.

In a video circulating online, Iyke was seen throwing punches at Maduagwu for defaming him online. Uche Maduagwu recently went on Instagram questioning how his colleague Iyke made his income.

The video led to Jim Iyke tracing Maduagwu and engaging in an altercation. In the video, people were seen trying to hold back Iyke but they failed to do so.

Maduagwu called Iyke a “ritualist” in his online video after questioning his extravagant lifestyle. Maduagwu also wrote in an Instagram post that he vowed to quit Nollywood if Iyke opened up about his real source of income.

In the aforementioned post, Maduagwu also threatened to call the Economic and Financial Crimes Commission to investigate his fellow actor’s income.

Who is Jim Iyke, the highest-paid actor in Nigeria?

Jim Iyke is popularly known as Nollywood’s “Bad-boi”. The actor gained popularity after appearing in several action and romantic films in the past 21 years.

The Libreville, Gabon native is currently 44-years-old and has appeared in over 250 Nollywood movies which include American Boy, When Love Comes Around, The Cat, Extreme Mission, etc. The actor became known globally after starring opposite British actor Hakeem Kae-Kazim and Nollywood actress Omotola Jalade Ekeinde in “Last Flight to Abuja”.

Aside from being an actor, he also opened his own movie production “Untamed Productions” in 2007 and his own music record label “Untamed Records.” The label includes several Nigerian music legends including, 2Face Idibia and Soud Sultan.

Jim Iyke is estimated to be worth over $15 million, making him one of the most influential actor-singer in Nigeria. The actor has over 2.2 million followers on Instagram, a number which continues to grow.