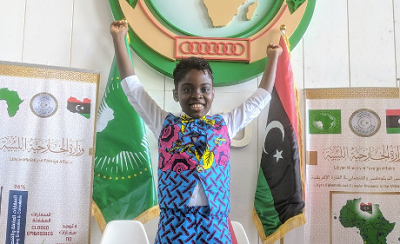 Young Disc Jockey, DJ Switch on Sunday, took her talents to the AU headquarters in Addis Ababa, Ethiopia where she jammed with African leaders

set was on the sidelines of the 32nd Ordinary Session of the Assembly of Heads of State and Government of the African Union.

She went through a variety of African music ranging from Afro-pop to Arabian music.

DJ Switch is a 10-year-old girl from Ghana who wants to be a gynaecologist when she grows up.

"I came up with the name DJ Switch because when I was a kid I was switching up the mood of people. When you're sad I'll make you happy, when you're happy and you want to be more excited, I'll make you excited," she says.

The second child and only girl of Ghanaian parents with five children, she and her family live in Dadieso in the Western region of Ghana.

She learned how to DJ roughly a year ago, in a village bar where the local DJ taught her how to use a laptop. After a couple of days learning the basics of playing on decks, "he's teaching me what he knows and I'm teaching him what he doesn't know," she says.

Watch her set below;