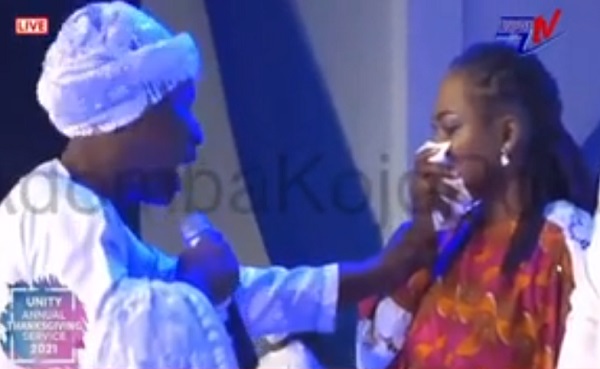 Gospel musician Cecilia Marfo has been trending for over 24 hours after she interrupted the performance of her colleague singer Joyce Blessing and ordered her to reunite with her estranged husband.

Blessing was performing at the Unity Group of Companies Annual Thanksgiving Service when Marfo barged unto the stage, snatched the microphone and directed her to be quiet.

In her famous powerful voice which gave her hits such as ‘Afunum Ba’ and "Mammire Angu", she directed Blessing to go back to her marriage amid tongues.

She also commanded the organist to play in a lower tone while she advised her colleague in the full glare of the audience.

"Go and take your husband," Marfo barked while moving up and down on the stage in a charged manner.

Blessing appeared visibly distressed by the actions of her senior colleague and covered her mouth with a handkerchief in surprise while she was consoled by a man on stage.

When it comes to interrupting the performances of her colleagues, Marfo has previous. In 2017, she interrupted another gospel singer Brother Sammy during a concert at the Baba Yara Sports Stadium in Kumasi.

Marfo forcefully tore his chain from his neck, gave him some slaps across the face, and warned him to desist from evil.