You can be successful in Ghana - Uncle Ebo Whyte 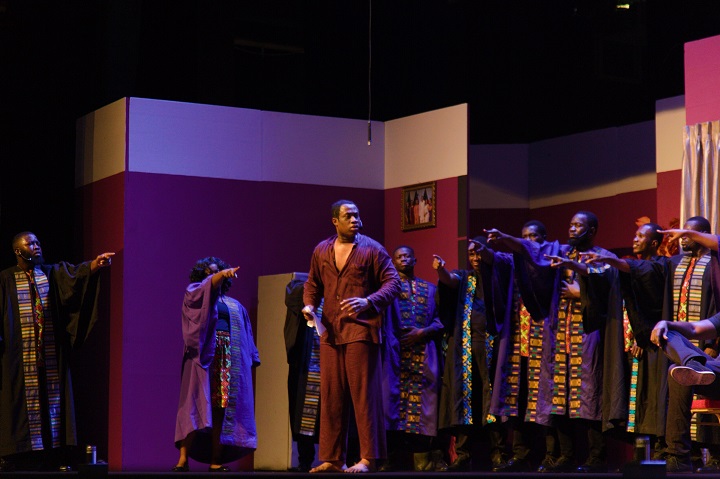 ALARMED at the rate at which people travel abroad to seek greener pastures, renowned playwright, Uncle Ebo Whyte, is encouraging Ghanaians to stay and work in the country since it could provide the success they seek outside.

Speaking with Graphic Showbiz after the first showing of his quarter one play, Final Warning, on Sunday, March 1, Uncle Ebo pointed out that travelling outside the country was not a guarantee of a better life since Ghana was blessed with the right environment for any person to prosper.

“Ghana has the right environment for anyone to succeed so you don’t need to travel to be prosperous. There are many people who have stayed and worked in this country and are doing very well.

“This country is blessed and its citizens must be proud of it and be part of its growth. That is why it is important that we stay in our country and work very hard to make it prosperous.

"Travelling outside the country is not an assurance that you will do well. The belief that we can only prosper when we travel to Europe and other developed countries is not true and the will to change that narrative was one of the influences of the script for Final Warning,” he said.

A biography of the founder of the Royal House Chapel International, Apostle General Sam Korankye Ankrah, Final Warning takes patrons through the rags to riches story of the revered man of God.

With a mother who was forced to marry his old father, a young Sam Korankye Ankrah grew up in a home that did not lack parental care but was witness to internal strife between his mother and father.

His poor background influences him onto an unpleasant path where he engages in social vices but his destiny comes calling very early when he gives his life to Christ after an evangelism programme by Joyful Way Incorporated at his school, St Johns Grammar in Accra.

That is the beginning of his calling as he establishes an evangelism ministry and goes into villages to preach.

Final Warning, like other Ebo Whyte plays, is full of music and dancing

Despite his zeal for God, the young man travels to the Netherlands to seek greener pastures after being led by God to marry Rita, a sister in the ministry he set up.

His reluctance to heed to the calling of God sees him being struck with sickness and that is when the Lord appears to him and gives him the Final Warning to go back home and establish a church.

Final Warning highlights the importance of choosing the right partner and their contribution to one’s success. Hence it details how Rita, the wife of Sam Korankye Ankrah has been a strong pillar in his Ministry and life in general.

The play is a fulfillment of Uncle Ebo Whyte’s plan to tell stories about prominent personalities in the country. In 2017, he celebrated Archbishop Nicholas Duncan Williams of Action Chapel International with the play, Nicholas.