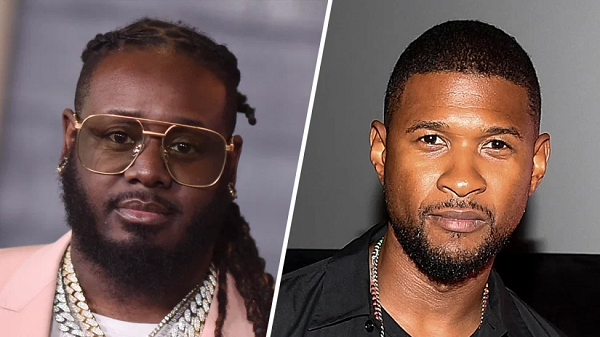 T-Pain is opening up about an encounter with Usher that changed everything.

In a short clip from the upcoming Netflix series "This Is Pop," the musician revealed that he fell into a four-year depression after the "OMG" singer told him he "f----- up music." E! News has reached out to Usher's rep for comment.

In the video, the "Buy U A Drank" rapper recalled that the two musicians established a friendship before the comment was made while on a flight in 2013. "Usher was my friend," he recalled. "I really respect Usher. And he said, 'I'm gonna tell you something, man. You kinda f----- up music.'"

Since the two were already friendly, T-Pain revealed he thought Usher was just joking at first. "I chuckled a little bit, it was a nervous chuckle," he explained. "I didn't understand, you know?"

But, the "Masked Singer" winner quickly realized his peer's comment was serious, sharing, "And then he was like, 'Yeah man you really f----- up music for real singers.'"

Once the songwriter realized the gravity of Usher's comment, he began to question why he was the one to blame. "I was like, 'What did I do? I came out and I used Auto-Tune.' He was like, 'Yeah, you f----- it up.' I'm like, 'But I used it, I didn't tell everybody else to start using it.'"

T-Pain first exploded on the music scene in 2005 and further popularized the use of the Auto-Tune effect by using it in his music including singles, "I'm Sprung" and "Bartender." However, it's worth noting that the pitch correction effect was first made known with Cher's 1998 hit, "Believe."

The producer went on to reveal that the interaction between the two artists had a lasting effect on him afterwards. "That is the very moment, and I don't even think I realized this for a long time," he shared. "But that's the very moment that started a four-year depression for me."

The Grammy-winning artist details the rest of his career and other big moments in the Netflix series, which will debut on June 22.