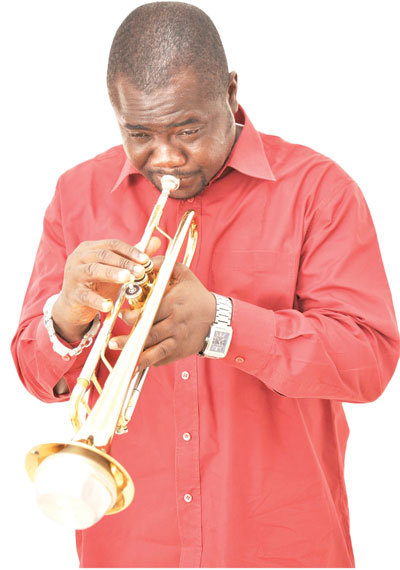 The two things Tema-based Pedro Roger Olympio regards above all things are his trumpet playing and intense desire to  assert the saving grace of Jesus Christ.

They were the principles that drove him to record his maiden album titled  Call On Him in 2009 and that has been followed  up with a new collection of eight songs titled Faith.

Olympio, who took up the trumpet during his primary school days at the famous John Teye School at Ofankor near Accra, is basically of the jazz  and blues mould. His ardent desire is to see  gospel music styles in this country expanded to embrace more engaging approaches.

He tries to make his conviction  reflect on the Faith album which was recorded at studios in Tema, Accra and Takoradi. The songs are sung in Ewe, Twi  and English and they range from the mid-tempo bluesy, emotionally-charged vocals piece titled  Aseda to a pleasant, trumpet-dominated jazzy track called Thank You and a sprightly  Agbadza-driven song named  Yesu Ye.

“I don’t think our  gospel songs should all travel in a one- way direction. There is a lot more we can do with our own rhythms and other exciting ones from other places to give our gospel more bite,” Olympio says.

He studied music  at the University of Education at Winneba and has come this far playing live or recording with an array of artistes including Ohemaa Mercy, Daughters of Glorious Jesus, Winneba Youth Choir, Rev Bernard Ankomah, Stella Seal, Gifty Osei, Black Prophet and Edem.

“The truth is I have learnt valuable things from Ghanaian players of other instruments such as pianist Victor Dey and guitarist Sir Young. That has helped me to form a broad attitude to music,” Olympio states.

The Faith album at certain points, does not sound like a trumpeter’s work. Tracks like Yehowa and Celebrate Jesus shine more for clever arrangements, touching vocal renditions and comely keyboard accompaniments rather than an over-reliance on trumpet parts.

Olympio points out that he targets  matured adult listeners and discerning youth who appreciate the intricacies of good musicianship. His Faith album, undoubtedly has  adequate stuff  for such people.