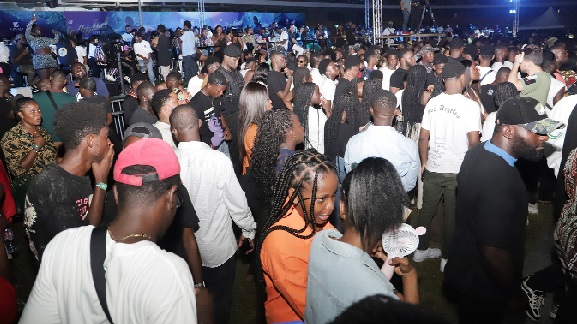 Some of the disappointed fans
30.5k Shares

Management of Live Hub Entertainment, organisers of Wizkid Live, has said it is considering legal action against Wizkid, for the Nigerian superstar to refund payments made to him.

Wizkid Live was expected to go down in history as one of the 'lit' concerts in Accra this year but things went sour for fans and patrons who thronged the Accra Stadium to party hard with Wizkid at the much anticipated concert last Saturday, but he failed to perform.

"We are considering going to court for a refund. We did what we could on our part to make sure he was okay. We paid him in full, paid for his stay at Kempinski Hotel, paid for his private jet among others," management stated.

They also noted that Wizkid came for sound check and they were in constant communication with his talent manager, Jada Pollock, but there was no indication that he was not going to show up.

"We spoke with Jada throughout, nothing was indicated, Wizkid was there for sound check although we noticed he was dull during the rehearsals. We never anticipated this to happen," they noted.

On why Wizkid, known in private life as Ayodeji Ibraham Bologun, did not perform, Live Hub management noted that, feedback from the camp of the ‘Bad to me’ singer indicated that the numbers played a role.

"We heard that it was because of numbers but there was no where in the contract he signed that he would only perform when the stadium was full. We had about 15,000 attend the event," management said.

They also admitted to having some production and technical issues.

"We had issues with ticketing and the production house we hired also had challenges. It is a big blow to us. Our plan died that night," management said.

As a result, fans and patrons left the stadium disgruntled as their dream of partying with one of Africa's finest afrobeats sensation, Wizkid, was cut short as a result of the artiste not performing.

Additional performances from two of Ghana's music giants, who were promoted as part of the list of performers, R2bees and King Promise, did not turn up.

The disappointment was characterised by feelings of sadness, loss, anger and frustration on the faces of hundreds of music enthusiasts with some calling on the organisers to refund their money when Daily Graphic spoke to them.

The unfortunate turn out of events was in bad taste for revellers who had waited for hours to jam with their music icon.

However, that never happened until about 4 a.m., when the technical team started packing some of the equipment.

A student and patron, Isha Adam, stated, "this is not right, we do not deserve it. Organisers should refund our money".

Another patron, James Ahmed, an entrepreneur added, "I feel bad having to wait for all these hours and the one I came to see didn't show up. There was no communication to that effect as well. We were just seated, this is gross disrespect to us”.

Additionally, Martha Duah, who came from Cape Coast, noted that the disappointment would be hard to forget.

"This will be hard to let go, Wizkid is my icon, I have followed him for a long time and I really wanted to see him. This was my motivation for buying the VIP ticket but here we are, it's painful coming all the way from Cape Coast and have no show," she said.

Although the talent manager of the Don't Dull artiste, Jada Pollock, was at the stadium, she left to the dismay of the patrons who wondered why.

Some of the patrons, who had waited till the wee hours of Sunday just to the hear the usual signature ‘Yeah yeah’ tune, pelted water bottles when news went round that Wizkid was not performing.

But for the disappointment by the headliner, the Wizkid Live concert was a potpourri of entertainment.

The stadium was charged with music from DJ Tunes, who was on the turntables, an act that prepared the fans and patrons on what to expect for the night.

The audience jammed to Yaw Tog's Sore and Aso)den song as he dished them, it was a different scene when Lasmid performed Friday Night which was evident in how the crowd sang the song word for word.

Responding to the turn of events, the organisers announced on their social media handles yesterday that refunds would be given to patrons once they submitted their ticket barcodes.

They also apologised for the mishap, stating that Wizkid breached his contract.

"LiveHub Nation, Wizkid breached his contractual obligation last night. We sincerely apologise for the inconvenience caused".
Writer's email: This email address is being protected from spambots. You need JavaScript enabled to view it.