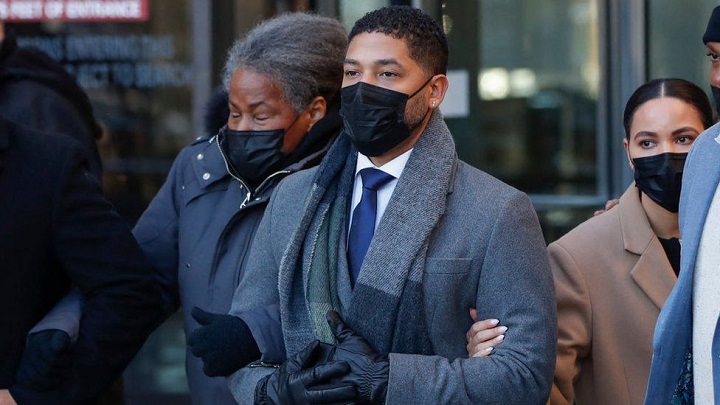 US actor Jussie Smollett lied to police when he claimed to have been the victim of a racist, homophobic assault, a Chicago jury has found.

At trial this week, Smollett, 39, stood by denials that he staged the hoax attack against himself.

Prosecutors countered that he "lied for hours" on the stand as he repeated what he told to Chicago police.

He was found guilty on Thursday of five counts of disorderly conduct.

Each count carries a penalty of up to three years in prison. Given Smollett's lack of previous convictions, experts have said a lighter sentence or probation is likely. A sentencing date has yet to be scheduled.

The jury of six men and six women reached its decision one day after deliberations began.

The trial stemmed from an incident nearly three years ago, in January 2019, when the former Empire television show star told police he was the victim of an attack.

Smollett, who is black and gay, told police he was set upon by two assailants who shouted slurs, yelled a Trump slogan, dumped a "chemical substance" on him and tied a noose around his neck while he was walking late at night in Chicago.

Authorities opened an investigation into the attack, but in February of that year, police charged Smollett with filing a false police report, alleging he had staged the assault.

He faced a total of six charges, each referring to different instances in which he was accused of lying to police. He was found guilty of five of the six charges, meaning that the last one had not been proven in court.

At trial, jurors heard from brothers Abimbola and Olabinjo Osundairo, who said Smollett had orchestrated the attack himself and paid them $3,500 (£2,600) to carry it out.

Smollett said the cheque was for a meal and workout plan from Abimbola, a friend and an extra on Empire, a TV drama about a hip hop dynasty. Asked by his defence lawyer if he gave the man payment for the alleged scheme, Smollett replied: "Never."

He also testified that he and Abimbola were involved in a sexual relationship before the alleged attack.

Special prosecutor Dan Webb asked the actor repeatedly about a "hoax" attack. Each time, Smollett denied that was the case.

"There was no hoax on my part," he said. "Any question you're going to ask about that is going to be denied."

"Besides being against the law, it is just plain wrong to outright denigrate something as serious as a real hate crime and then make sure it involved words and symbols that have such historical significance in our country," Mr Webb said.

Jussie Smollett not returning to Empire

Outside the court after the verdict was read, Mr Webb added that "for Mr Smollett to get up in front of [the jury] and lie for hours and hours, that really compounded his misconduct".

He called it "unexpected" that Smollett would lie repeatedly during trial, and said that it will be something that he raises with the judge during sentencing.

Nenye Uche, a lawyer for Smollett, said that the team "obviously respectfully disagree with the jury's verdict", and that they are "100% confident" that the case will be overturned on appeal.

Authorities have said Smollett wanted to boost his profile because he was "dissatisfied with his salary" on Empire. By the fifth season of the show, he said he was being paid $100,000 per episode.

He was eventually written out amid the controversy around the alleged attack.