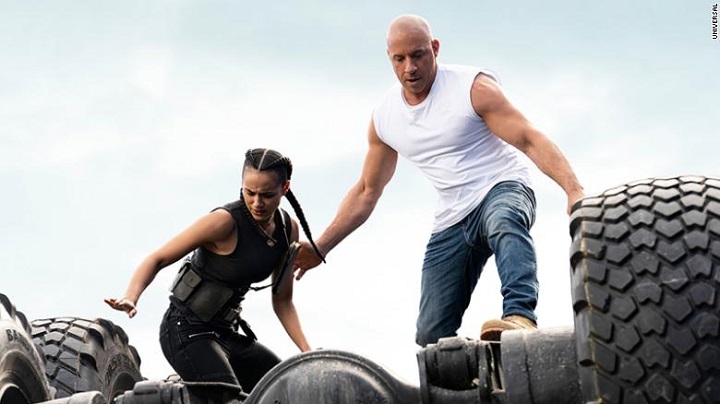 The latest Fast & Furious film has our heroes rocket a Pontiac Fiero into outer space. But that was merely the second most impressive feat the film pulled off this weekend. The first was opening to the biggest box office numbers since the pandemic began.

"F9: The Fast Saga," the ninth film from the action franchise starring Vin Diesel, brought in an estimated $70 million in its North America opening this weekend, according to the film's studio, Universal.

That number not only exceeded expectations, it is the largest debut at the box office since 2019's "Star Wars: The Rise of Skywalker."

The film also notched a bigger opening weekend than the franchise's prior release, "Fast and Furious Presents: Hobbs & Shaw," a spinoff which premiered to $60 million in 2019.

So even though "The Fate of the Furious," the eighth film in the series, made $98 million in 2017, the numbers for "F9" are pretty solid, even by pre-pandemic metrics.

The big weekend also adds to the film's already strong global haul. "F9" has now made $405 million around the world since opening internationally last month.

The summer season has had its ups and downs at the box office so far, but the performance of "F9" is significant for an industry that's trying to get back on its feet following the Covid outbreak that sent box office numbers plummeting.

The opening for "F9" is also another success for the Fast & Furious franchise, which is one of the most popular brands in all of cinema. The series has racked up more than $6 billion worldwide.

In short, this weekend was a win for theaters.

The "F9" release was delayed multiple times because of Covid-19. In fact, Universal wasted no time shelving the film, which was originally set for a May 2020 release, as soon as the pandemic hit. The move was an unpopular one at the time.

"[Theaters] were quite upset with us because they thought that we were overreacting. Even people inside the company thought that we were a little crazy for doing it," Donna Langley, chairwoman of Universal's filmed entertainment group, told CNN Business in December. "But we just felt that it was better to sort of plan for the worst and hope for the best.

"Of course, now 2020 — pardon the pun — being hindsight ... it was the best decision we could have made," Langley added.

Obviously, even though the opening of "F9" is good news, all things considered, the theater industry still has a long way to go before it reaches any sort of normalcy. But that's why the film's strong debut is so important: it's another step in the right direction.

So what's next? Theaters will see if the buzz around "F9" leads to more foot traffic for the 4th of July holiday — a weekend historically known for moviegoing.

After that, Marvel's "Black Widow," hits theaters and Disney+ on July 9. In case you just landed on this planet, Marvel Studios is the most popular blockbuster brand in the film industry, so that's pretty good news for theaters.

The big question in Hollywood is whether or not the momentum keeps up at the box office. No one is sure of the answer. But theaters couldn't ask for a better lineup on the marquee over the next few weeks than an avenging Marvel superhero and the Fast & Furious family.