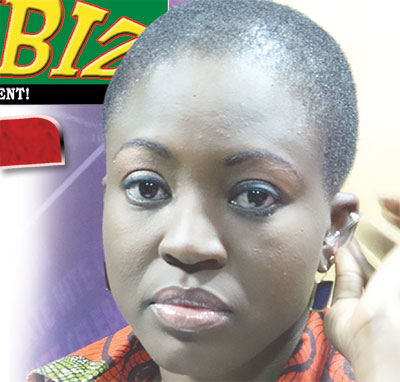 From a distance, the job of a television news anchor or presenter would appear to be fun.  Many teenagers and young adults occasionally drift off to wonderland and dream of becoming like many of the known faces on television. Few of them take time out to imagine the challenges that most of these television personalities encounter in their line of duty.

Many television presenters would reveal it takes a lot of guts to maintain their composure under the pressure-cooker atmosphere that precedes live programmes such as news, outside broadcast coverages and entertainment variety shows. One television personality who’s seen it all is the presenter of etv’s The Late Night Celebrity Show , Dzifa Affainie; now DzifAffainie.

Dzifa’s exceptional interviewing skills and her ability to tame the most controversial of artistes, on her celebrity show, stems from years of experience in television. As she sat opposite me, during our interview, the petite and charming mother of three appeared calm while answering my questions.

“I believe ageing is a state of mind and how one carries herself around matters a lot. I’m in my mid 30’s, given birth to three kids, lost one child at delivery and pregnant at the moment but people see me and think I’m below 20 years.

“I feel young all the time and I guess it’s working for me. I don’t eat anything special but perhaps the glory goes to Almighty God for giving me this physique and a man who will do anything to maintain a woman he loves”. This, according to her, was the secret to her never-changing petite figure.

The bubbly presenter, who recently changed her showbiz name to DzifAffainie, said she had hinted her fans about the change of her showbiz name a year ago through an interview with peacefmonline. She said “though some celebrities are using showbiz names which are far from their original names, mine has something to do with my current name.

“ I was born Deborah Dzifa Klu, and this is the name most of my St. Mary’s Secondary School colleagues know and that is the name I started my profession with during my Teenbeats days. For some reason, my father decided to change our surname to Smith and I also decided to make my traditional name my first name. Then, I shortened my Christian name which became my second name. I therefore became Dzifa Debbie Smith.

I got married to a tailor by name Elike Nkansa and became Dzifa Debbie Smith Nkansa. That was the name I used during my TV Africa days”.

Reacting to rumours that her ex-husband was the one who sent her packing from their marital home, the presenter of The Late Night Celebrity Show  insisted the rumours were lies and produced a copy of the Certificate of Divorce which indicated she was the petitioner and her ex-husband was the respondent in their divorce case.

DzifAffainie further said it was unfortunate some people had decided to spread such vicious rumours because she did all she could to mend the marriage with her ex-husband when things went sour. “I tried many solutions including the use of relatives and prominent personalities like Kwaw Ansah of TV Africa who was my boss at that time, but realising that the differences we had were irreconcilable, I decided not to waste my time in a marriage that was not going to work. I filed for divorce at the Accra Circuit Court in September 2009. After this, I went back to my maiden name Dzifa Debbie Smith”, she said.

As one who’s always in the public eye, forging ahead with her career after a divorce must have been challenging. But DzifAffainie, who’s now married to Lt. Col (Rtd) Edward Affainie, said that she’d long moved on. Lt. Col (Rtd) Affainie is the father of Dzifa’s third daughter and the child she’s carrying, and currently works with the United Nations Mission in South Sudan.

When I asked how they met, she didn’t hold back. She simply replied “he was in the military when I met him. Realising that my name was going to change eventually, I decided to introduce my new name gradually by adopting the showbiz name DzifAffainie which is a combination of Dzifa and Affainie with the last and first letters of the two names respectively remaining a unifying factor.

“ I have now changed my name as we speak and I’m Mrs. Dzifa Affainie and no longer Dzifa Smith. My husband and I had our ordinance marriage in April 2013 and we plan to solemnize the marriage sometime next year after delivery and weaning the child”.

Having anchored news and also presented live television programmes for years, it was interesting finding out which aspect of her profession she disliked most. DzifAffainie admits she occasionally has a dislike for live programmes. To her, pre-recorded programmes offered more flexibility.

“Since I often write the script myself, it means I have to rack my brains whilst on the show without any prior research on my guest. It’s always challenging, but I guess after doing it for all these years it has become inevitable and fun”.

In many ways, controversy is a necessary part of show business and presenters of celebrity shows often have to find ways of dealing with controversy when it pops up on their show. The presenter of The Late Night Celebrity Show  disclosed that she’d been confronted with many tense moments in the three years she’s hosted the show.

“I remember Stonebouy and Bandana who were sarcastic and ironic to each other throughout the one hour show. It was so tensed I had to change sitting positions and sit in between them to avoid a likely brawl. Meiway, spoke about having 7 kids with 3 different women; something he never speaks about and he shed tears the whole time”, DzifAffainie recalled.

Her celebrity show also hosted the FOKN Boys who are noted for sparking controversy on television. Asked if she was disturbed the duo would do or say anything controversial during her interview with them, she responded “Not at all. They both always speak their minds and in fact, common knowledge is they will always generate issues for discussion after TV interviews”.

In show business, bad publicity is said to be better than no publicity, and in Europe some tabloids would pay a lot of money to acquire the juicy bits of a celebrity’s private life. Responding to whether controversy was a positive or negative force in show business, DzifAffainie revealed “it depends on how you look at it. Some controversies arise out of no one’s fault and when media practitioners get to know, they want to inform the public of what is going on in a celebrity’s life.

“There are some celebrities who, for some time, have not been able to do anything meaningful and want to thrive on controversial stories to keep their names on the lips of the public. You’ll find such mediocre celebrities jumping from one party to the other, tweeting half nude pictures all in the name of celebrity story. There are other celebrities who want to remain quiet and concentrate on their jobs and family. This does not mean society will not acknowledge their work.

“I personally do not see how controversy should be a positive force in showbiz. It is a fact that, as humans, we will fall short of expectation but when that happens we should not use it for cheap popularity but rather show remorse to our family, friends and fans to gain sympathy and support from them”.

DzifAffainie is currently studying German at the Goethe Institute in Accra to add to the English, Akuapem, Twi, Ga, Ewe and Fanti that she speaks. Concluding the interview, she mentioned that the greatest price she’d paid, at the peak of her career, was spending little time with her daughters. “My first two children never had enough of me when they were young, and that’s the price I paid but not anymore”.