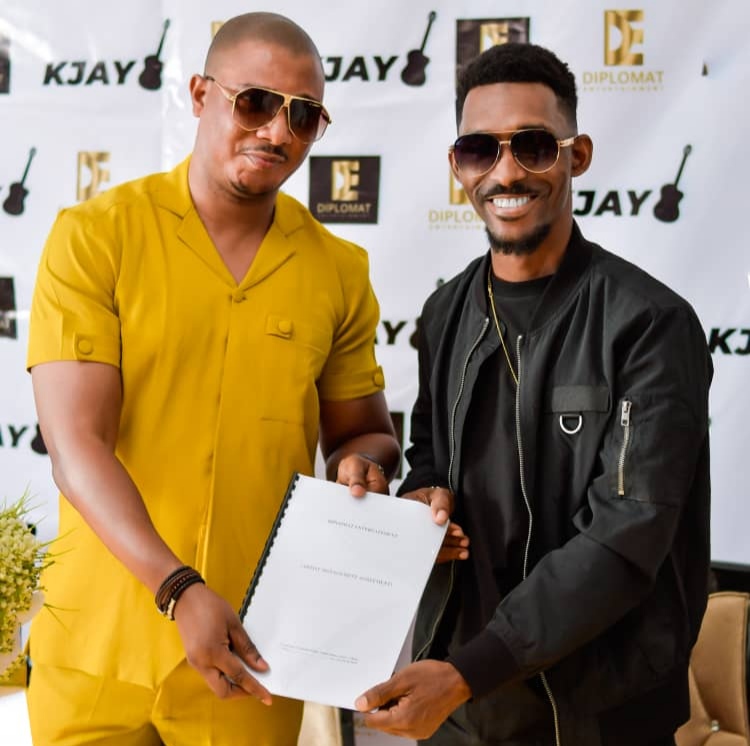 The new deal would see KJay who was placed third in the popular music reality show “Stars of the Future” back in 2008 join Diplomat Entertainment family as he quests to gain musical stardom.

Speaking at the signing ceremony, Mr. Bestman Omorere, Chief Executive Officer of Diplomat Entertainment, said, bringing Kjay onboard the record label is his way of giving young talented musicians the opportunity to shine in the music industry.

“I believe KJay has the potential of becoming a mega superstar considering his unique vocal prowess and being a very good live band performer. The future is bright for him and we remain hopeful of taking him to much greater heights,” he said.

KJay on his part said he was delighted to join the record label and already looks to churn out some bangers to Ghanaians and music lovers around the world.

“I am aware about how competitive the music industry is but I am very much prepared about navigating my big break into the industry and with the support of my new label.

“I am fully poised to take a big step to the next level in my career. I know it wouldn’t come easy and I am ready to persist and do some good music that will make waves in Ghana and beyond,” he said.

KJay, who is a former student of the University of Ghana, also revealed that he had gained exposure to the music industry having participated in season one of the West Africa Project Fame in Nigeria.

“I have always dreamt of joining the big league of Ghanaian artiste and I feel this is the right having garnered lots of experiences after participating in numerous musical shows.

“The musical journey has been tough but I expect to become much tougher but I know I have the talent to emerge one of the best singers on the local scene,” he said.

When asked about his upcoming musical project, Kjay revealed that he had a couple of big collaborations and music lovers should expect the best of tunes from his camp.

Kjay during his days at the University of Ghana won the musical talent show dubbed “Legon Idols Talent Show”.