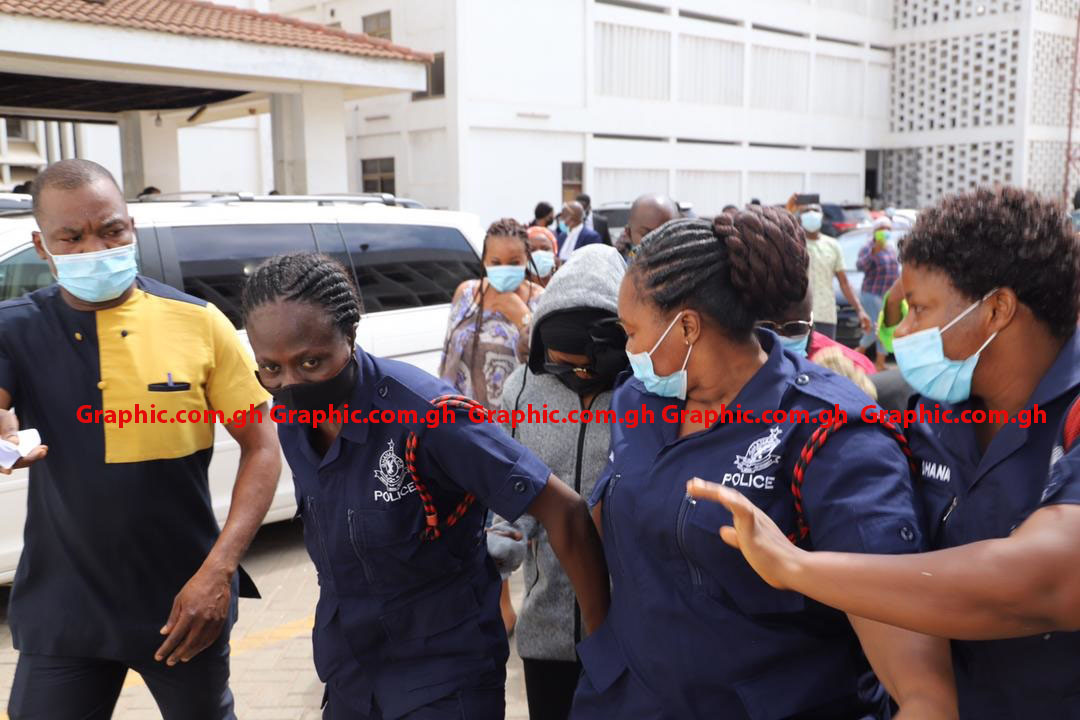 “Mummy please, Mummy, I beg you, Mummy please” were the words of Actress Rosemond Alade Brown, aka Akuapem Poloo when the court slapped her with a 90 days imprisonment for the publication of a nude picture with her seven-year-old son in June, 2020.

In an emotional atmosphere, lawyer for the convict, Mr Andy Vortia along with other lawyers who were present at the court prayed independently to the court for a non-custodial sentence but the court held that a harsh sentence must be passed to serve as a deterrent for would be offenders.

The court held that the prevalence of publications of material with the potential to corrupt public morals in the country and which affected children’s best interest, right to privacy and dignity as well as the country’s moral image needed to be curbed, reports Graphic Online's Justice Agbenorsi who was in the courtroom.

Ms Christiana Cann, the judge, therefore sentenced her to 90 days in prison each for all three counts which are to run concurrently. 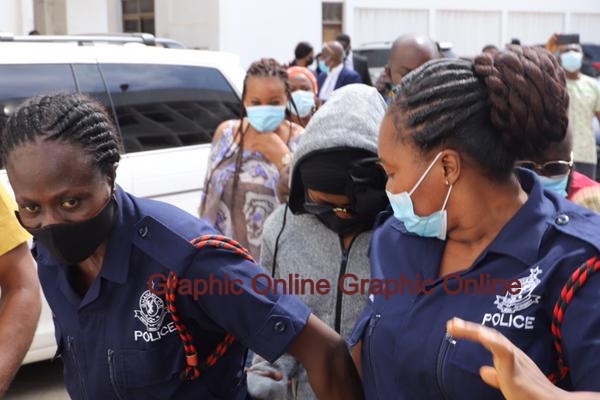 PHOTO: Actress Rosemond Alade Brown, aka Akuapem Poloo on her way to jail after the sentence

Akuapem Poloo in court over publication of nude photo with son

The actress was convicted on her own plea, after she had pleaded guilty to three counts of publication of obscene materials, engaging in domestic violence namely a conduct that in any way undermined another person’s privacy or integrity, and engaging in domestic violence namely conduct that in any way detracted or was likely to detract from another person’s dignity and worth as a human being.

The court had postponed sentence to Friday pending a pregnancy test after it convicted her of the offence on April 14.

When she appeared in court on Friday for sentencing, Ms Christiana Cann, the presiding judge, sentenced her to 90 days in prison each for all three counts which are to run concurrently.

She was whisked away in a taxi cab by the security officials.

This was after the actress had pleaded guilty and convicted on her own plea to the charges.

The three charges included, publication of obscene materials, engaging in domestic violence namely a conduct that in any way undermined another person’s privacy or integrity, and engaging in domestic violence namely conduct that in any way detracted or was likely to detract from another person’s dignity and worth as a human being.

The actress had originally pleaded not guilty to the counts when she was first arraigned in November last year but later changed her plea to guilty on April 14 this year.

After pleading guilty last Wednesday, the court deferred sentencing the actress to today (April 16) and remanded her into police custody for a pregnancy test to be conducted.

The pregnancy test, is in compliance with section 313A (1) of the Criminal Code (Act30).

It states that where a woman is convicted of a non-capital, offence, the Court shall order that she be tested for pregnancy unless the Court has reasonable grounds to believe that the woman is post-menopausal.

When the case was called today, the result of the pregnancy, which was negative, was announced by the Judge.

Counsel for Brown, Mr Vortia in his plea of mitigation against a custodial sentence for his client, argued that Poloo was a budding actress and a first time offender adding that “A custodial will kill her career entirely.”

Counsel argued that his client was a single parent and the bread winner of her family hence a custodial sentence would again inflict more punishment on her son.

Again, counsel argued that first time offenders should be given a second opportunity to reform.

Mr Vortia also prayed the court that it should consider the fact that his client ‘pleaded guilty simpicita which did not waste the court’s time.

He argued that Poloo’s choice and style of dressing had also changed ever since she was first arraigned.

“She has pulled down the nude pictures and apologised to both the public and her seven-year-old son,” He said.

To further firm up his arguments against a custodial sentence, Counsel again invited the court to consider media publication about his client’s charity works with a recent on being undertaken at her Alma Mater.

For her part, the prosecution led by Chief Inspector Agartha Asantewaa, who also prayed against custodial sentence, said the actress was not known to the police

In sentencing Poloo, the court took into consideration the aggravating facts, intrinsic seriousness of the offence, gravity, prevalence and premeditation with which she committed the offence levelled against her.

The court also took into consideration the mitigating factors which included pleading guilty simplicita, being a single parent and the convict’s show of remorse.

The court in giving its reasons to buttress the sentence held the view that the action of the accused did not only infringe on the rights of the child. It morally corrupted those who saw the post. It also caused the pride and dignity of the country as a whole.

“The court is bothered with posting nude photos on social media. There is no doubt that apart from the canker of rape, defilement, physical assault, the publication of obscene materials are on the increase.

“There is, therefore, the need to uphold our societal values and deal with this canker. The best interest of the child shall be the primary concern of the court,” Ms Cann said.

She further asked, “Did she ask for the permission of the child before posting the said picture? Did she respect the child’s right? No she did not,”

The judge further noted that Poloo had a basic responsibility for the development of her son but rather infringed on her son’s best interest, right to privacy and dignity.

Ms Cann added that sentencing Poloo must not only be punitive but must serve as a deterrent to society.

“A harsh sentence will serve as a deterrent,” Ms Cann said.

The facts as narrated by Asantewaa were that the complainant, Mr Bright K. Appiah, was the Director of Child Rights International Ghana.

She said on June 30, last year, Brown celebrated her son’s seventh birthday and took pictures with him while she was nude and the son half-naked, and posted the pictures on her Instagram page which went viral on social media.

A write-up accompanying the picture read: “I am naked in front of you because this is how naked I was giving birth to you, so in case you find me lying somewhere, don’t pass by, but see me as your mom who brought you to life”.

The pictures attracted comments, and the prosecution said the behaviour of the accused person undermined the dignity of her son, among others.

The prosecution said the complainant petitioned the Director-General of the Police Criminal Investigations Department, and the matter was referred to the Domestic Violence and Victims Support Unit (DOVVSU).

Brown, the prosecution said, was arrested and in her caution statement, admitted posting the nude picture with her son unintentionally.

The prosecution held that Brown deliberately posted the pictures.