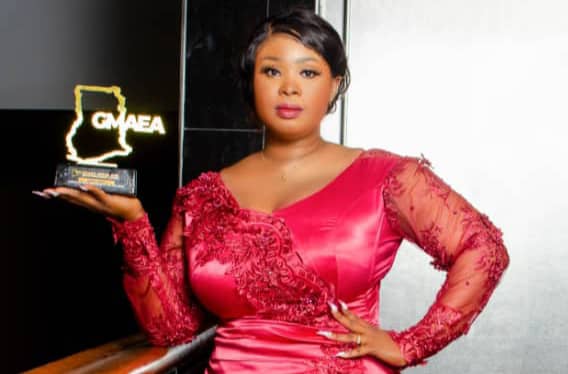 Actress Rabby Bray has been awarded the 'Creative Arts' Personality of the Year' for 2022.

The organizers of the Ghana Media and Entrepreneurship Awards, stated that Rabby Bray had proved herself worthy by achieving some unprecedented landmarks this year in the arts industry.

The founder of the Ghana Media and Entrepreneurship Awards, Ellis Adjei, said that Rabby Bray stood out from her colleagues by turning personal goals into benefits for her community; as well as using her immediate medium of communication, film, to highlight some relevant issues in the society during the year of review.

Speaking in an interview on the award to Actress Rabby Bray, the Founder of the Ghana Media and Entrepreneurship Awards, Ellis Adjei, described the actress as a blessing to Ghana.

"We hardly see many of our Actresses motivating young ladies to do the right thing; Rabby Bray is one of the few. Especially in these times where false glamorous lifestyles are the major topics on social media, Rabby is a necessary check and a reminder about the status quo in Ghana; especially for young women who want to rise above the African stereotypical image of what a woman should be", he explained.

Rabby Bray produced and also starred in her dramatic movie 'Drops of Happiness".

The movie illustrated the reality of unemployment and its extreme disadvantages, not just to the youth in Ghana, but to the family system and the society.

Rabby Bray also successfully produced the second edition of her 'all female' talent series 'RabbyStarlet' which saw the overall winner walk away with ambassadorial deals, a car, and a cash prize as capital for a start-up business idea; an unprecedented initiative by an individual or an actress in Ghana.

However, this is not the first honour Rabby Bray has received this year. A few weeks ago, she won the prestigious award for the 'Next Rated Woman of the Year' at the annual Women's Choice Awards Africa and also the 'Woman of the Year' award at the 'Accra Music and Arts Awards 2022'.