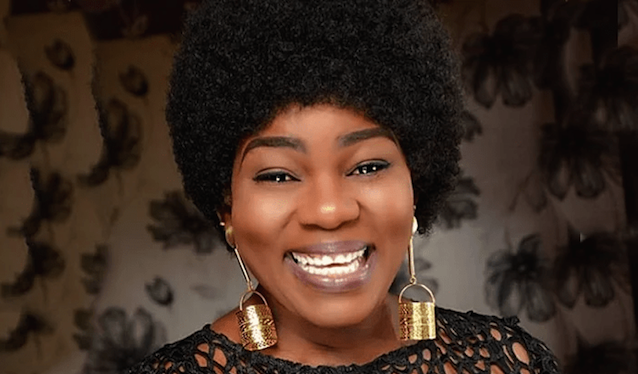 The President of the Actors Guild of Nigeria, AGN, Emeka Rollas confirmed that Ameh died on Sunday at a Nigerian National Petroleum Corporation (NNPC) hospital in Delta State.

According to reports, the actress died in Warri, Delta State around 11 pm on Sunday.

Ada Ameh was said to have been a guest of an oil company toyshop and his family when she suddenly collapsed.

It was gathered that she was rushed to the NNPC’s hospital but passed on before they arrived at the facility.

Report has it that several movie stars have been trooping the facility on Monday morning to see her remains.

The popular actress shared a video of her eating with the family around 12:53pm on Sunday on her official Instagram page.

Ada Ameh, born on May 15, 1974 in Ajegunle, Lagos, became famous following the role of she played (Anita) in the movie Domitilla in 1996, and was more recently adorned for her comic characters especially in the series, The Johnsons currently showing on Africa Magic.

She recently revealed that she is being sued by client for failing to deliver a particular job despite having mental health issues.

Ada Ameh went on to shared a video on Instagram saying that she’s facing a problem that’s about taking her life.

The actress, who lost her only child in 2020 stated thus, “I have an issue right now and it’s taking my life, but I no go die. We would get over it. I was given a job, but I didn’t do it because I have mental health issues.

"Will people understand it if you have mental issues? No, they wouldn’t. They are slamming me with a bill, suing me. It’s okay”.