A night of great music at African Legends Night 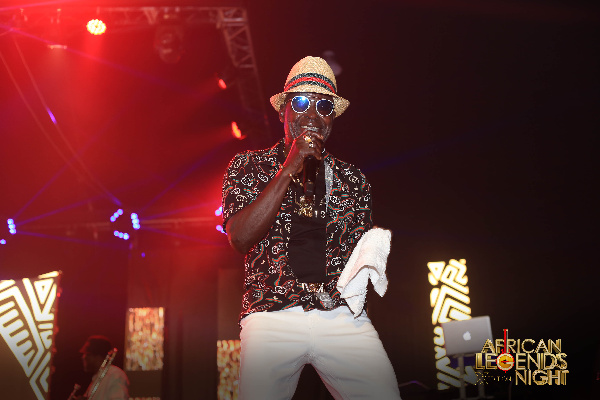 From the thunderous screams that accompanied the mention of his name as the next act, it was quite certain that veteran highlife artiste, Amakye Dede’s presence had been missed
30.5k Shares

With the kind of names billed for this year’s African Legends Night, one could not have expected anything less than a spectacular show and that is exactly what was delivered at the Grand Arena of the Accra International Conference Centre (AICC) on Friday, December 2.

Efya, Samini, Rex Omar and Amakye Dede took turns to give thrilling performances for patrons who thronged the venue.

The show started at about 9pm with singer Efya clad in a yellow dress who understood the assignment and wasted no time in dishing out songs like Best In Me, Gingam, Your Own among others.

Right after her act, the MC on the night, Foster Romanus introduced Rex Omar as the next performer.

Perhaps, it was a moment of pride for the Abiba hitmaker to reconnect with his fans who probably missed his presence on stage.

With well-known songs such as Abiba and Nyame Bofo getting patrons in a party mood, Rex Omar maintained the energy when he intermittently interacted with the audience during his time on stage.

He appreciated the patrons for coming out in their numbers despite the heavy rains that night.

Dancehall artiste Samini has carved a niche for himself as a showstopper and his presence on stage was nothing short of the high expectations music enthusiasts have of him.

Songs such as Linda, Movement, Gyae Shi was what Samini needed to keep the audience on their feet throughout his performance.

He encouraged the audience during his performance not to be worried about Black Stars’ loss earlier that day.

From the thunderous screams that accompanied the mention of his name as the next act, it was quite certain that veteran highlife artiste, Amakye Dede’s presence had been missed.

And oh boy! He was just on fire the whole time with his popular songs such as Bebrebe, Iron Boy among others serving the purpose of bringing good music vibes to patrons.

The four performers on the night were given a citation and also inducted into the African Legends Night Hall of Fame.

African Legends Night is a musical concert held annually with the aim of recognizing and celebrating African musicians who are considered living legends.

The event has over the years celebrated living legends such as Hugh Masekela of South Africa, Femi Kuti of Nigeria and Ghanaian legends like Amakye Dede, George Darko, Ofie and Ben Brako, Freddy Meiway and Yvonne Chaka Chaka.