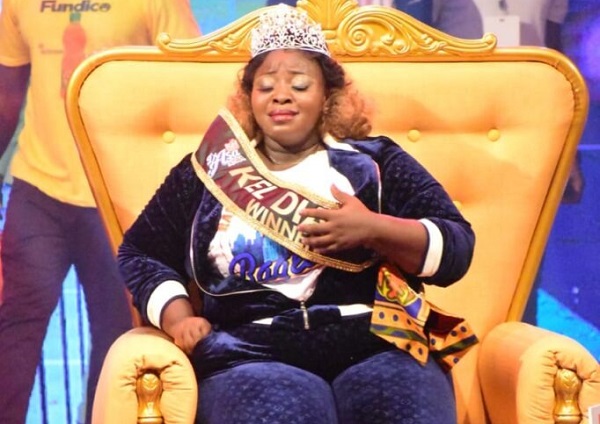 Love, winner of season one of the Di Asa, a dance competition for plus-size women has been crowned the ultimate winner of this year's Kel Di Asa Xtra which took place last Sunday, at the National Theatre in Accra.

She surpassed 49 other women who were drawn from the five seasons of Di Asa including the 12 contestants that entered the grand finale after a talent show session, highlife dance, hip-life session, and freestyle edition where the ladies chose their own songs to dance with.

Love was given a cash prize of GH₵50,000 and souvenirs from sponsors of the show.

At the end of the competition, Maame who is from Kumasi and a season four contestant, came second and was awarded a cash prize of GH₵C40,000 and souvenirs from all the sponsors of the show.

Dee Baby, from the Northern region who was the winner of Season Four, also secured the third position and was given a cash prize of GH₵30,000 in addition to the goodies from the sponsors.

Season three winner, PM also came fourth and was given a cash prize of GH₵20,000 and a lot of goodie bags.

Borley from the Greater Accra Region and Season 5, also came fifth and was given GH₵10,000 with gifts from the sponsors.

Bene, who came sixth and Doris who secured the seventh position, and all the other contestants, Maafia, Sapato, Pandy, Mercy, and Mimi were all given cash prizes of GH₵5,000 respectively.

Akatakyie and Kwame Yogot also thrilled the audience with good music and amazing performance of their old hits.

Season six of Di Asa was also launched at the event.

Speaking at the event, the Corporate Affairs Manager for Tobinco Group of Companies, who doubles as the Ghana Journalist Association (GJA) President, Mr. Albert Kwabena Dwumfour, said the auditions will go back to the markets as it was done in the past seasons before the COVID-19 pandemic.

He said there will be auditions in 32 markets in all the 16 Regions of Ghana.

He said the auditions are expected to start in the third week of August.