Elvis Crystal: how he turned his gift into a passion 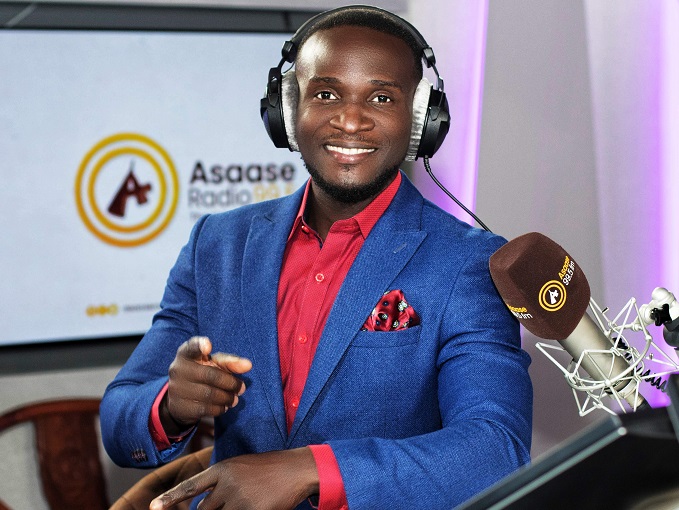 NOT many people are able to figure out their gifts and if they do, sometimes they have difficulty knowing what to do with it or which path to take but for host of Rush Hour on Asaase Radio, Elvis Crystal, right from when he discovered his voice was a gold mine, he knew what to do with it.

According to him, it had always been his dream to be a radio star and in 2006, he took the bold step of letting his parents know the path he had chosen, then he started working on making that dream a reality.

“In truth, voice quality is crucial to the art of a radio broadcaster. An announcer should be such a friendly voice on the radio; a listener should be able to connect with him/her whether he or she is in the house, in a car, at the workplace or just lounging at a cozy place after hours.

“An announcer or presenter's voice must be healthy, credible, warm, well-dressed, cheerful and should have character and personality and I am glad God gifted me with it,” he told Graphic Showbiz.

Crystal as he is called by many, said he has no doubt that his voice is one of the reasons most media houses have wanted to work with him.

“I think every voice has a purpose; for radio, you'd want a particular voice quality for news, announcements and prime time shows or even late hours.

"Today when radio station recruiters seek out on air talents they look for a natural, clear, conversational, warm, and friendly voice, it should definitely not be a hee-haw voice lest you scare the listener to a bottomless pit of "I wish I didn't listen to you," he said.

Elvis said being on top of issues is also another advantage for presenters. “As a presenter, you should also be on top of issues. Don’t forget you are not only entertaining, you are educating as well and there are times you will get questions from listeners. So for me, I may have the voice but I read a lot, invest in my craft, research and make it a point to always stay on top,” the former host of Area Gang on Pluzz FM said.

Just like many, Elvis, whose father owns Crystal TV, had some good encouragement while climbing the ladder.

“I recall before this whole thing started, I was into emceeing as well and I had people tell me that my voice was good so I should consider radio. And it hit me, I was like radio is something that I already want to do so getting that feedback was an affirmation,” he said.

In spite of his love for the craft, Elvis also had some reservations about the radio fraternity. “The standard now has fallen, I must say. People you would love to listen to 10 years ago are now following the trends and all, they do not consider what they say on air.

“They forget that now radio has to be family friendly because things have changed, the children today are being exposed to a lot of things day in and day out and they can tune in to radio stations randomly. I wish we could do better,” he said.

On what his past experiences with other radio stations have taught him, he said, “Having worked with some amazing and seasoned radio colleagues over the years, one thing that stands out and worthy of note is team work, you can't beat that.”

Having found a new home at Asaase Radio as the host of the drive show Rush Hour, Elvis said he was optimistic that the station will stand the test of time.

“Asaase Radio has created an incredible platform to get creative and to draw in the listener more than ever, with the audio visual set up, there's more to bring aboard.”

Apart from having an enviable voice, he has a great sense of fashion, and Elvis told Graphic Showbiz, he just loves to get the basics of fashion right. “For me, fashion has to do with the individual, I just look for what blends and to get the basics right, that’s all.”

Unlike others who encountered challenges with family because they wanted to do media work, Elvis said his were very supportive. “I never had issues, and in fact my first job at Atlantis FM was worked out for me by my dad. They encouraged me but I have had my challenges, it has not been smooth for me like that, mine had to do with pronouncing some words in Twi.”

Elvis Crystal is an old student of St Marys Seminary Secondary School and University of Ghana, Legon where he studied Sociology and is currently pursuing his Masters degree in Management and Administration at the University of Ghana Business School.

He is also the virtual teacher for this year’s Rolls Royce and Amazon Web Service sponsored STEM Educational TV show for pupils.

At the ninth edition of the Radio and Television Personality (RTP) Awards, he won the Best Late Afternoon Show Host.

Call him a master of many things and you wouldn't be wrong because apart from being a presenter, Elvis is an emcee, a voice over artiste, a poet and in his spare time, he loves to rap.