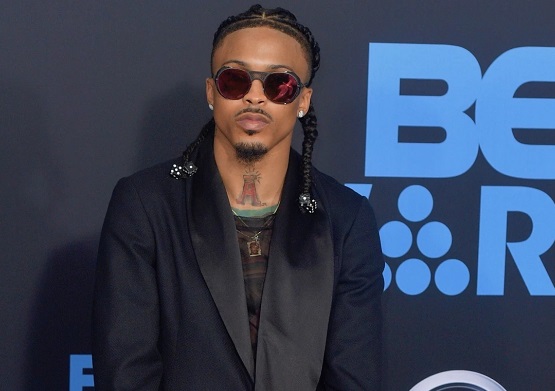 August is coming at us fast, and we're still in July...

Of course, we're talking about August Alsina. The 27-year-old rapper released a new song-Entanglements— on Saturday night, and naturally, it got people talking for its name.

"The definition of entanglement (No, oh-woah, oh, oh) / It's when you're tangled in the sheets (Yeah, yeah)," August croons in his new single, featuring rapper Rick Ross. "Girl I know that we don't call it a relationship (No, oh, oh) / But you're still f--kin' with me (Oh), yeah (Yeah)."

The track's cheeky title and lyrics appear to be a reference to Jada Pinkett Smith's recent Red Table Talk episode, in which she sat with husband, Will Smith, to discuss her past romance with August.

"About four and a half years ago," the actress described. "I started a friendship with August. We actually became really, really good friends. It all started with him just needing some help. Me wanting to help his health, his mental state."

Jada explained that she and Will decided to split and get some space from each other after going "through a very difficult time."

It was then that Jada admitted to getting "into a different kind of entanglement with August."

"It was a relationship. I was in a lot of pain and I was very broken," she continued. "In the process of that relationship I definitely realised you can't find happiness outside of yourself.

"Luckily enough, you and I were also going through a process of healing in a much different manner. We did everything we could to get away from each other, only to realise that wasn't possible."

When Will and Jada realised they both wanted to give their relationship another shot, the Girls Trip actress said she decided to "break all communication" with August.

If anything, the longtime couple explained they were confused by the 27-year-old singer's timing. As they put it, their separation happened "several years ago."

Of the bombshell Red Table Talk episode, August reacted to Jada calling their past romance an "entanglement."

In an interview with Vulture, the 27-year-old confessed he only watched "small clips floating on Instagram" of the tell-all episode. However, he most certainly heard about the way Jada described their past relationship.

"If you look up the definition of 'entanglement,' it is a complex and difficult relationship. It was exactly that," August told the publication. "I think it's just the language that probably stuck out to people. But I definitely have to agree with it being an entanglement. It definitely was something complicated, a complicated dynamic."

Additionally, the rapper explained that he has no regrets about how things unfolded publicly.