We must protect our aviation installations 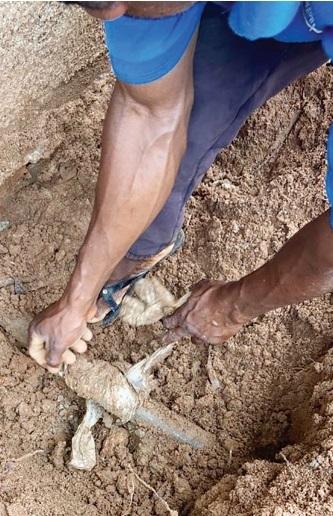 We must protect our aviation installations
30.5k Shares

Last week, we broke a disturbing story about how the Ghana Civil Aviation Authority (GCAA) was losing some of its sensitive installations in Accra, including cables used to direct aircraft pilots during landing and take-off.

This is due to increasing attacks on the authority’s properties in the La Nkwantanang and the La Dadekotopon municipalities.

Among the installations are the main signal receiving station near Madina and the signal transmission station at La Wireless.

The underground cables, made up of electricity, communication and aeronautical, which serve the two stations have either been dug out or cut by encroachers who are putting up buildings on lands reserved for aviation activities.

We learnt that the activities of these encroachers on sensitive aviation lands are gradually becoming inimical to the safety of flights coming into the country, with sometimes air traffic controllers losing direct communication with pilots finding route in the country’s airspace.

As soon as an aircraft enters our airspace, the controllers need to start communicating with the pilots so that collision will be avoided. Sometimes the aircraft will be in the air and communication with it will break, which is dangerous.

The Daily Graphic is deeply concerned about this unfortunate development because frequent communication disruptions between pilots and air traffic controllers can erode the gains made in aviation safety over the years after the country obtained Africa’s highest score in Aviation Safety Oversight in 2019 by the International Civil Aviation Organisation (ICAO).

We need to remind all Ghanaians that poor performance in aviation safety has a negative impact on the general aviation economy because commercial airlines will be hesitant to use the airspace. It will also affect revenue to the government, the GCAA and the Ghana Airports Company Limited (GACL).

Already, Ghana’s airspace is regarded internationally as one of the safest in the world. And there is ample evidence to back this claim — after the last safety assessment in April 2019, Ghana obtained an Effective Implementation rate of 89.89 per cent, one of the highest by an African state, after the ICAO concluded its Coordinated Validation Mission (CVM).

It is instructive to note that owing to its aviation safety record, Ghana currently controls the airspace of Togo, Benin and a large portion of the Atlantic Ocean into Angola, which was ceded to Ghana by the ICAO.

We cannot afford to erode all the gains made by the GCAA to ensure the safety of our airspace over the years by allowing encroachers to set us back and, more crucially, put the lives of aviation staff and those of international travellers in harm’s way.

Over the years, 650 acres of GCAA land at La Nkwantanang had been reduced to 50 acres as a result of encroachment, and despite efforts put in place by the authority to safeguard its properties, the illegal act prevails.

We need the active support and collaboration of the National Security and the police to assist in the protection of the affected aviation installations. This is definitely unpatriotic and all efforts must be directed at ensuring that these sensitive and vital state assets are protected

Indeed, this fight cannot be won by the GCAA alone, without the support of the government, as the involvement of the latter is fundamentally crucial to the sector.

We believe that the ability of the aviation sector to maintain an ICAO compliant regulatory framework and attain sustainable growth is hinged on the protection of these vital installations of the GCAA.