Punish those who clutter our city 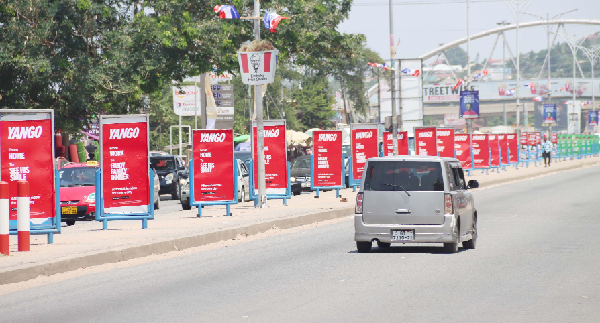 The Department of Urban Roads on Tuesday, August 17, 2022, raised concerns over median signs and billboards mounted at the various road intersections in the city of Accra. Without any doubt, the signs instead of beautifying our streets rather clutter the median and pose a danger to motorists.

Median signs are erected at short intervals within road reservations or medians, while billboards are erected along roads or at intersections.

Both are usually used by advertisers and institutions to brand and give visibility to corporate goods, services or goals.

According to the department, the median signs and billboards did not only pose visibility challenges, particularly at junctions, but also “de-value the beauty of the environment due to sign clutter and poor maintenance”.

We at the Daily Graphic have come across letters to the minister warning of this phenomenon and drawing his attention to the fact that if no action is taken, “the flouting of the standard for advertisement would add up to driver distraction, which could also increase the rate of road crashes.”

These concerns have been raised by the department as far back as February this year, and one such letter sighted by the Daily Graphic and signed by the acting Director of the Department, James Amoo-Gottfried, stated: “A series of engagements have been done for the assemblies, particularly the technical officers, and yet no progress has been made to get them to comply with the Standards of Advertising Specification for Outdoor Signs, gazetted by the Ghana Standards Authority.”

“By a copy of this letter, we shall be grateful if you kindly use your good offices to request the assemblies in Greater Accra to comply with the standards,” it added.

Section 188 (1) (2) (3) of the Road Traffic Regulations 2012, (L.I. 2180) states that an outdoor advertising sign placed on a road or related facility shall be placed in a manner that does not interfere or obscure a traffic sign, device or signal to render the use of the road or facility unsafe to a motorist.

Often, public institutions fail to call Ghanaians to order when a wrong is committed. That is why the Daily Graphic is encouraged that the Department of Urban Roads has embarked on this initiative.

We do hope the department will continue to show that it is living up to its functions, and that must be commended.

We are, however, not happy with the assemblies and their technical officers, who in spite of engagement by the department, have so far failed to ensure order in the citing of billboards and median signs in their jurisdictions.

Equally, we are not happy with advertisers and many corporate organisations whose billboards or signage are an obstruction to motorists.

We think they are all complicit in any injury or death out of a road crash because of such illegality.

Indeed, we add our voice of truth and accuracy to the letter by the department to the Greater Accra Regional Minister for the right thing to be done, and that should be immediate.

We are convinced that siting of billboards and signage appropriately falls within the agenda of “Making Accra Work Again!”

We therefore call for an audit of these signage and corporate organisations falling short of Section 188 (1) (2) (3) of the Road Traffic Regulations 2012, (L.I. 2180) should be made to pay for dismantling their unauthorised signage. They must also be charged a penalty for breaching the law and made to do the right thing.

The assemblies and their technical officers must also be held liable and charged for the dereliction of their duties and for putting the lives of road users in the city at risk of road crashes.

It is time Accra worked again for the benefit of all.