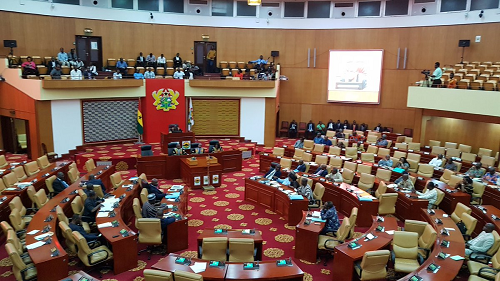 The question, therefore, arises as to why the passage of this bill has tarried for so long. Is it not in the interest of parliamentarians?

In general terms, the chapter prohibits conflict of interest (Article 284), situations where a public officer can be a judge in his or her own cause or interest (Article 285), the acquisition of properties solely through one's public position (declaration of assets - (Article 286) and makes the Commission on Human Rights and Administrative Justice (CHRAJ) the institution responsible for superintending these provisions.

Since 2005, after CHRAJ had investigated then Minister of Transport, Dr Richard Anane, and found him to have been in a conflict-of-interest situation, the institution has endeavoured to operationalise these provisions under Chapter 24 of the 1992 Constitution.

That became even more significant when a High Court, in 2006, quashed the decision by CHRAJ on its findings of perjury, abuse of office and conflict of interest against Dr Anane.

The case, subsequently, travelled to the Supreme Court in 2007, where it upheld the decision of the High Court and ruled that an identifiable individual had to complain to CHRAJ to trigger its investigative functions.

This brief legal history of the Public Officer’s Conduct Bill shows that for about 17 years the country has been endeavouring to get the bill passed into law.
The question is: what is impeding the process?

Last week, the Attorney-General, Mr Godfred Dame, revived the issue of the Public Officer’s Conduct Bill, once again, at a stakeholders' engagement in Accra.

Insightfully, he told participants that the bill "underscores the fundamental point that the principal test of ethics is the 'public interest'".

He said when public officers were in breach of acting in the public interest, they behaved unethically, which undermined the progress of the nation and the well-being of the people.

Indeed, for democracy to thrive, right behaviour from public officers is of utmost importance. Anything short of this is averse to the national interest.

With this in mind, political and administrative leaders, as well as those in public institutions, need to fully cooperate with the public to get things done in the collective interest of the people and the country at large.

After all, if there were no Ghanaians, these political leaders and institutions would not be needed.

Therefore, it is imperative we build public confidence in the offices they hold, the sectors they supervise and the roles the sectors play in effective service delivery, as well as enhance national development.

One of the means for achieving that, we believe, is the Public Officer’s Conduct Bill — the citizenry ought to be able to point to well-defined rules and hold officers accountable. This is necessary because, in our view, confusion over ethical behaviour in public service, or what is right or wrong, has plagued us long enough.

It is for this reason we urgently have to move on with the passage of the law.

The Public Officer’s Conduct Bill has been tabled and re-tabled in Parliament for over a decade now.

Apart from helping our democracy, the bill, when passed, will help Ghana be in sync with international conventions ratified by our Parliament in December 2005 — the United Nations Convention Against Corruption and the African Union Convention on Preventing and Combatting Corruption.

We are aware that CHRAJ has worked and is still working to get institutions and agencies have their respective internal codes of ethics mechanisms working, as we wait for the all-important bill to be passed.

Indeed, the A-G noted at the engagement that the passage of the bill must not prevent institutions from further improving accountability and ethical codes of conduct in their various workplaces.

In that vein, it is appropriate to commend CHRAJ for taking steps to improve its ethical codes of conduct by enacting "specific codes of discipline to meet peculiar demands...".

This is a good lesson from which we can all learn.