No lessons learnt after 21 years of May 9 disaster 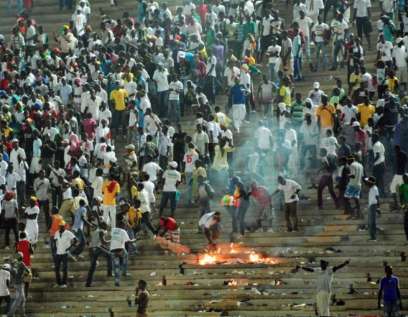 Life is too precious to be wasted accidentally or intentionally. In view of that, it is expected that when by accident a life is lost, steps are taken to avert a recurrence.

And when that accident happens and many lives are lost as it happened on May 9, 2001, it is incumbent on all as individuals and collectively as a society to ensure that as much as humanly possible, that tragedy does not occur again.

However, after 21 years, it seems no lessons have been learnt on the incidents that triggered the May 9 disaster, as till date, Ghana football continues to witness acts of hooliganism and violence.

On May 9, 2001, it was officially recorded that 126 lives were lost in an avoidable incident at the Accra Sports Stadium after a match between Accra Hearts of Oak and Kumasi Asante Kotoko.

The tragedy, the worst to have been recorded in Ghana’s football history, came about following an overreaction from the police who threw teargas into the crowd in a bid to disperse a group of irate fans who had lost their cool and were ripping off the plastic seats in the stands.

The pandemonium that followed was unimaginable and not only were those lives snuffed out, but many have been left with permanent physical disabilities and emotional trauma while some were deprived of their breadwinners.

In a bid to forestall a recurrence, the government at the time, headed by President John Agyekum Kufuor, set up a five-member Commission of Enquiry, chaired by Sam Okudzeto, to investigate the incident and make recommendations to forestall future recurrence.

After 17 public hearings and extensive work, the commission submitted its report which included recommendations. The report largely blamed the police for their overreaction and seemed to have absorbed the irate fans of blame and the policemen who were charged were eventually spared prosecution.

Having been spared the rod, one would have thought that football fans had learnt their lessons and stayed away from such acts of violence, but it seems no lessons have been learnt at all.

Between 2001 and as recent as last Sunday (May 8), football matches in Ghana continue to record pockets of violence, often carried out by fans and there is no consideration at all – match officials, journalists, players and club officials, as well as police personnel on duty, have all been at the receiving end.

Yet, no one, not a single person has been prosecuted and sentenced to serve as a strong deterrent.

Last Sunday, there was a poignant reminder that violence was still very rife in local football with two incidents reported. One happened last Saturday when Tamale City FC team were attacked at Nsoatre in the Bono Region after their 1-1 draw game against Baffour Soccer Academy.

Two days later, last Monday, there was a reprisal attack on the officials of Nsoatreman FC who were also subjected to similar attacks following their game against Steadfast FC at the Aliu Mahama Stadium in Tamale. Those two are the only reported ones, but each week, there are similar incidents that happen around the country which often go unreported.

The Ghana Football Association (GFA) has been trying to win back interest in the local game, but it seems not much has been done to make the game safe and secure for all the stakeholders. It is not enough to impose fines and home match bans on clubs whose fans misbehave while those culprits are spared and continue to perpetuate their criminal acts to mar the game.

The Daily Graphic believes that it is time to prosecute perpetrators of violence and hooliganism in football. The law must be allowed to take its course. Club officials must stop shielding their fans who misbehave or try to intervene for their release when they are apprehended.

One hundred and twenty-six lives lost because of an act of irrational behaviour is far too high a price to pay for a game of football.

Never Again! is the inscription that accompanies the statue erected at the entrance of the Accra Stadium in memory of the 126 people who perished.

The Daily Graphic is of the view, however, that not many people care about this and nothing has been done to ensure that indeed, never again, is football taken through such a dark moment as very little has been done as individuals or collectively as a society to forestall another human-induced tragedy.