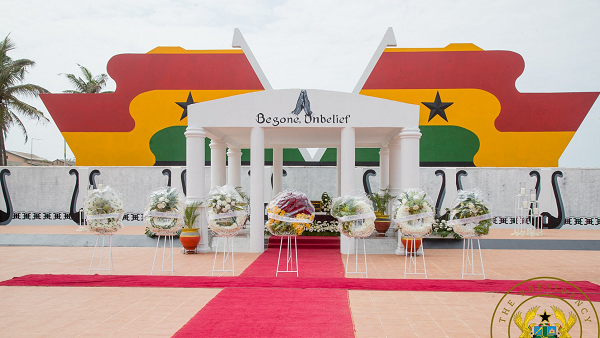 The nation yesterday marked the 10th anniversary of the passing of former President John Evans Atta Mills with a memorial and thanksgiving service. The day was also used to unveil a tombstone and inaugurate the refurbished Asomdwee Park.

The solemn occasion was under the patronage of President Nana Addo Dankwa Akufo-Addo, who, in an address, eulogised the late President and described him as his ‘good friend’ who would not be forgotten (SEE OUR LEAD STORY).

Mr Mahama, for his part described Prof. Mills as an achiever who demonstrated that one could govern humanly and get a lot done, adding that the late former President was the personification of the expression "substance over form" (SEE STORY ON PAGE 17).

As the saying goes, a country that does not honour its heroes is not worth dying for. It is in this light that Prof. Mills and many other statesmen who served our dear country so well need to be honoured for their service and dedication to the country.

The Daily Graphic is satisfied that the nation saw it befitting to recognise and honour former President Mills who passed on in the course of duty to the nation and the people of Ghana.

For us, this is so important to serve as an encouragement for many others to also render selfless and dedicated service to the nation.

Nonetheless, it was disheartening to observe that we could not have one event to commemorate the anniversary of the passing of former President Mills, who was loved by all, for which reason honouring him should have involved all.

Sadly, needless feud and rancour, which have become a normal feature of the country’s partisan considerations, seem to have extended to the commemoration of the 10th anniversary of his passing.

For us, whatever differences there were could have been resolved between the Founder and Chief Executive of the Atta Mills Institute, Koku Anyidoho, and the Atta Mills Memorial Heritage, under the leadership of a former Minister of State in the Mills government, Alex Segbefia.

We are disturbed that the annual commemoration of the passing of Prof. Mills is entangled in this feud, a development which is not healthy and in tandem with what the late former President stood for, a man of peace.

Indeed, we cannot be amused at the way two anniversary programmes were held in honour of this great man who was an epitome of peace and love.

We, however, note with pride that the two factions are both very much interested in and meant well for the memory of the late former President Mills.

However, we sincerely believe that a synchronised programme in honour of the ‘Asomdweehene’ would have been better than a divided one.

Going forward, we call for unity of purpose to honour the late former President because if we celebrate him in disunity, we fail in our pursuit to mark what he stood for.

The Daily Graphic believes that peace must prevail as we work together with one purpose to honour this great statesman.

The news of the passing of the third President of the Fourth Republic hit the country with shock and disbelief at noon on July 24, 2012.

Former President Mills, politician, tax expert and law scholar, was born in Tarkwa on July 21, 1944 and served as President from 2009 until his death in 2012.

He was also a consummate sportsman who played in the University of Ghana football team, along with President Akufo-Addo.

Prof. Mills loved God and manifested same in many ways, especially when, as President, he instituted a national day for prayer and thanksgiving, which took place at the Black Star Square for the entire country to render prayers and praises to the Almighty God for His grace on the country.

Many also remember former President Mills as the peace-loving (Asomdweehene) man whose father-for-all governance abruptly ended a decade ago. It is for this reason that, as a nation, we must rally in unity to honour our former leader. Anything short of this will not be in the interest of the man Atta Mills and the nation Ghana.