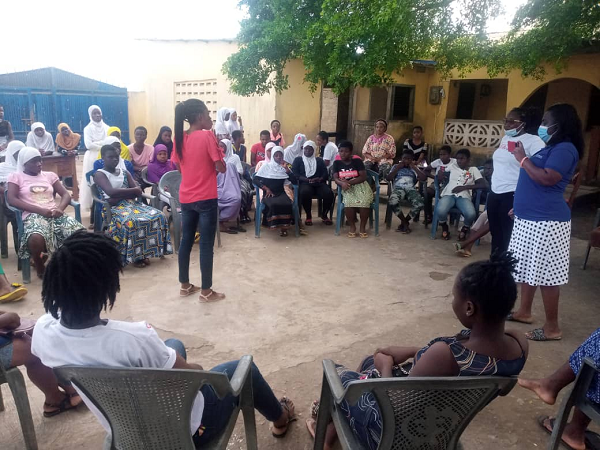 Under trees, in the shades near the Nyinasin M/A Basic School in the Cape Coast Metropolis of the Central Region, adolescent girls numbering about 35, gathered, confidently speaking about menstrual hygiene.

It may not be surprising when adolescent girls gather, but in this case, the topic is an unusual one, considering the fact that many adolescent girls have made the topic of menstrual hygiene a taboo and do not speak much about it.

With some wearing hijabs, some in senior high school uniforms and others in their teens, the gathering told the diversity of background the adolescents had come from.

But their common denominator was being adolescent girls, and they were excited about the group.

They shared experiences of how they survived menarche and laughed with their facilitators about the funny, yet uncomfortable stories.

Other girls, the younger adolescents mostly and some new members of the group, still giggled at the stories with their hands covering their mouths out of shyness.

Their facilitator at the meeting, Ms Mariana Issaka demonstrated to them how to sew sanitary pads from cloths.

The girls are part of the United Nations Population Fund (UNFPA) funded Safe Spaces Project, being implemented by International Needs Ghana in the Central Region.

Both projects, targeting several thousands of adolescent girls aim at working to achieve increased access to sexual and reproductive health, promoting reproductive rights and empowering them to better their socio-economic conditions.

The visit was to exchange ideas with the projects and to build a stronger community of workers promoting the wellbeing of adolescent girls.

The issues facing adolescent girls, some of who are already mothers, are daunting and the UNFPA, with its implementing partners, are working to help them go through the period safe and empowered; one girl at a time.

A facilitator with the Orange Spaces at Techiman, Ms Comfort Yeboah, who had visited Nyinasin in an interview, said they were happy to be in the Central Region to learn more to better what they were doing in the Bono East Region.

"We are doing a lot of the things they are doing here. The Orange Spaces provide the adolescents, particularly young mothers to learn income generating skills such as soap making and others to help them support themselves and empower them economically.

She explained that many adolescent mothers fell prey to sexual predators because they did not have any means of livelihoods.

"We also go around schools and communities to give talks on sexual reproductive health," she said.

"What I like is that they use a programme outline and go by it so they know what has been taught at every meeting. Their meetings are also very interactive making them interesting," she said, adding the good lessons would be adopted at the Orange Space meetings.

A Peer Educator from the Orange Spaces, Baillawu Awudu said joining the visit had been a great learning experience for her.

Its refreshing to know we are not alone in this effort to empower adolescent girls and I feel happy to be part of the Orange Spaces project.

Ms Nusrat Issah, an adolescent mother with the Orange Spaces said she was energised by the activities of their peers in the Central Region and was going to commit more of her energies to empower the girls back in the Bono East Region.

A Programmes Officer with INGH in the Central Region, Ms Elikem Awuye said the Safe Spaces were more committed to ensuring that girls stayed in school and achieved their goals.

"We work at getting them to stay in school and so here, we don't introduce them to much income generating skills which may make them neglect school and pursue money. We encourage them to at least finish basic school," she noted.

Ms Issah said the Safe Spaces had impacted a lot of adolescent girls positively, giving them a new lease of confidence to face lives challenges.