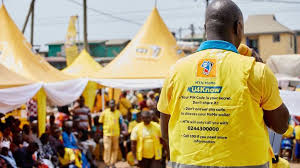 Mobile telephony giant, MTN, says it is working to address the activities of MTN mobile money fraudsters in the country.
According to Mr Godwin Tamakloe, MTN Mobile Money executive, a monthly average of about 380 mobile phone accounts have been blocked this year signaling a drop from the previous year’s average of 900.

He also disclosed that the number of fraud cases reported had dropped significantly and there were indications that more attempted fraud cases had been reported by customers although the fraudsters were not successful, an indication that members of the public were becoming more conscious of the activities of the fraudsters.

He indicated that, despite the gains, MTN was still encountering challenges in expeditiously blocking accounts used for fraudulent activities.

Mr Tamakloe was however confident that with the help of the public and the security agencies, the activities of these fraudsters can be nipped in the bud. “Since the beginning of the year, the police have arrested about 13 people in relation to MTN mobile money fraud,” he disclosed. He said MTN was in discussions with the police to publish the names of the fraudsters arrested. “Our management has written to the head of the police in that direction. We are still appealing to the police,” he stated.

He stated that information they have received suggest that there are new forms of mobile money fraud targeted at nurses and some other unsuspecting Ghanaians. He explained that following the decision of the government to pay outstanding salaries of nurses, some of these fraudsters managed to obtain details of the names of nurses, their phone numbers and the amounts owed them.

He said there was also a new trend of mobile money fraud whereby fraudsters promise to double the money of customers in a scheme similar to a Ponzi scheme and cautioned customers to be wary of such activities.