The Minister for Communications, Mrs Ursula Owusu-Ekuful, on Monday paid a working visit to the National Communications Authority (NCA).

Accompanying her were the Minister for Information, Mr Mustapha Abdul-Hamid and Deputy Minister for Communications, Mr Vincent Sowah Odotei.

After being welcomed, the Minister, held a closed door meeting with management of the Authority where she was briefed by the Acting Director General of NCA, Mr Joe Anokye, on the operations of the Authority.

Key among the discussions were Quality of Service (QoS), billing and unsolicited electronic communications issues and the Digital Migration process.

Mrs Owusu-Ekuful mentioned that she had already met with the Mobile Network Operators (MNO’s) and they had listed fibre cuts, energy and power issues as factors leading to poor service delivery.

On fibre cuts, the Minister said apart from on-going government construction work and projects, other factors such as private constructions and galamsey contribute to this challenge.

She urged NCA management of the need for an inter-ministerial or cross-sectorial engagement to deal with these issues. 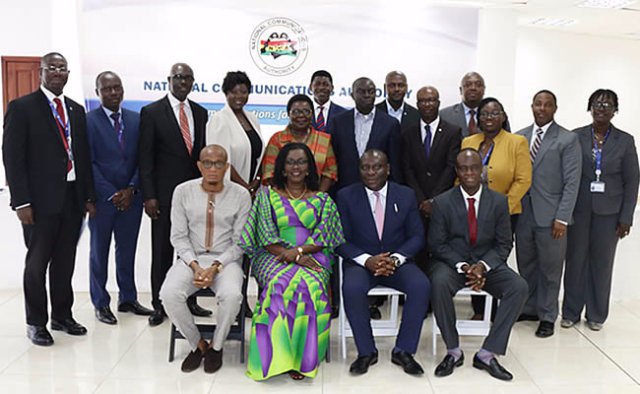 Meeting the rest of the NCA staff, Mrs Owusu-Ekuful commended the Authority for the good work done over the years in the regulation of the Communications industry.

She said that without communication, there is no development in any part of the world and the Authority has an indispensable part to play in the nation’s forward-march into the 21st century.

The urged staff to do their work diligently and with professionalism without the interference of partisan politics.

She was quite confident in the good team of Management at the NCA and pledged her support, to collaborate and assist all stakeholders in the industry for an effective digitalised nation.

Adding, the Minister for Information, Mr Mustapha Hamid, who joined the team to familiarise himself with NCA’s operations, assured the Authority of his sector’s commitment to aid this good course.

He also entreated staff to embrace Government’s policies despite their political affiliations to promote development.