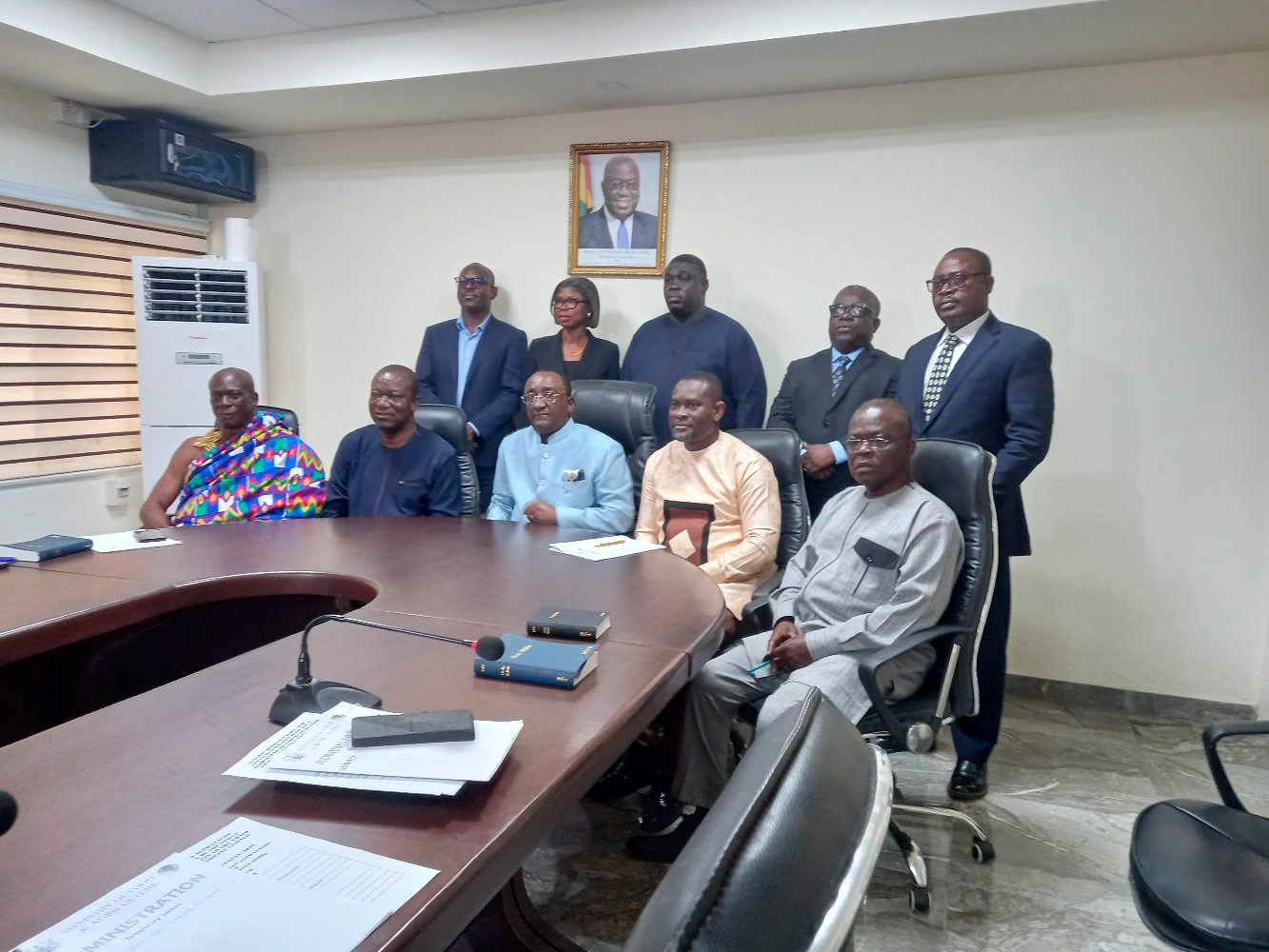 Dr Owusu Afriyie Akoto (seated middle), Minister of Food and Agriculture, with some members of the board during the inauguration
30.5k Shares

Over many decades, the country has been heavily reliant on traditional crops such as cocoa to generate foreign exchange to support the economy.

Unfortunately, however, global uncertainties which often leads to price fluctuations of the commodity affects the revenue budget from the crop and in many instances, derails the government’s development plans.

It is against this background and more that there has been the need for the country to diversify and develop other potential crops that have the potency to also generate revenue to make up for shortfalls in case of any global uncertainties.

Last Friday, it came to light that the Tree Crop Development Authority (TCDA), is working to position the country to earn US$16 billion from six selected tree crops annually in the next eight to 10 years.

The crops, namely cashew, oil palm, shea, coconut, mango and rubber are being promoted under the Planting for Export and Rural Development (PERD) programme aimed at diversifying the over reliance on cocoa as a major export commodity with an annual income of $2 billion.

The Minister of Food and Agriculture, Dr Owusu Afriyie Akoto, disclosed this laudable move in Accra at the inauguration the newly constituted board for the Twifo Oil Palm Plantation (TOPP) in the Central Region.

Modelled along the lines of the Cocoa Marketing Board (COCOBOD), the TCDA is responsible for spearheading the diversification of the agricultural sector, with a focus on the development of tree crops and its expected benefits to the country.

“Already, the TCDA is making a huge impact on farmers in determining a minimum price for cashew in the Bono, Ahafo and Bono East regions albeit, in its infant stages. The last time I checked, it was GH¢9 per kilogramme.

“It has an ambitious target of lifting the US$2 billion from cocoa to US$16 billion with the six crops in the next eight to 10 years. By the end of 2020, a total of 22 million seedlings of the six selected crops had been distributed. Ghanaian farmers have demonstrated their commitment to come along in this new development,” he said.

Dr Akoto noted that TOPP was very much part of that scheme of things because TOPP was in the second module of the Planting for Food and Jobs (PFJ) programme which is PERD.

The government and Unilever entered into a partnership to transform the TOPP into a world-class and sustainable oil palm plantation.

Under the partnership, TOPP and the government will work together by committing more investments into the development and expansion of the plantation, support smallholder farmers and also adopt strategies to ensure the plantation improves its impact on the economy.

At the signing of the partnership, Vice-President Dr Mahamudu Bawumia said the overall vision of the partnership was to develop a well-integrated and sustainable palm oil industry as part of the industrialisation drive of the government.

According to Dr Akoto, Unilever was positioned to take the produce by TOPP to produce all kinds of products for the country’s economy and the ECOWAS economy and beyond.

“So, you have a responsibility to ensure that this company grows. You are part of the initiative for the transformation of the economy,” he urged the board.

The Chairman of the board, George Oduro, expressed gratitude for the opportunity and assured of their readiness to serve as part of the vision to help transform the country’s agriculture.

“We are fully aware of the strategic role the TOPP could play in the transformational agenda, especially in the quest to diversify the economy from cocoa monopoly in the southern zone to the establishment of a TCDA.

“It is for this reason that my colleagues and i consider this task as a very important one in ensuring the turn-around of TOPP and make it a profitable entity.

“We promise to do our best to justify the confidence reposed in us as a board,” he said.