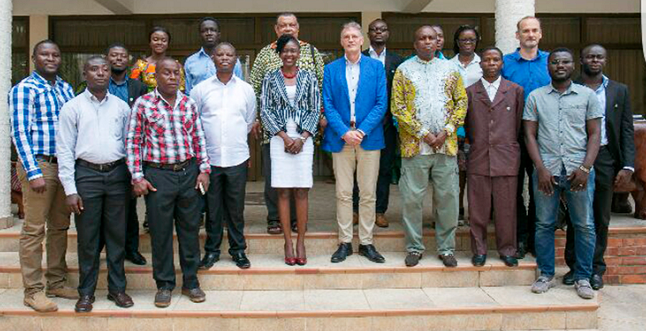 Members of the Businesses in Environmental Stewardship Network after the inauguration in Accra with Mr Fred Smeit (4th right), Secretary for Climate Change and Water at the Netherlands Embassy
30.5k Shares

The Netherlands Embassy is facilitating an environmental management project in the Atewa Forest in the Eastern Region with an amount of €1.5 million.

Known as the ‘Atewa Living Water from the Mountain,’ the project’s overall objective is to conserve and secure the Atewa range forest as a national park and ensure its sustainable management.

The Secretary for Climate Change and Water at the Netherlands Embassy, Mr Fred Smeit, who announced this in an interview on March 10, 2017 during the inauguration of the Businesses in Environmental Stewardship Network (BESNet), said the embassy had been supporting forest management in Ghana for more than 10 years.

He said basically the support had been through development cooperation programmes, environmental management and forestry.

“We find Atewa forest important not only for its natural environmental values but also because it provides water economically,” he said.

Mr Smeit said water was becoming more scarce due to climate change related issues, pollution and activities such as galamsey, therefore, an initiative to manage the Atewa Forest in a sustainable way was important.

“We would like to see that the status of the area becomes a national park though not so much for the biodiversity reasons but also economic value that water provides to household and companies,” he said.

The International Union for Conservation of Nature (IUCN) Ghana REDD Project Officer, Mrs Saadia B. Owusu- Amofah, said there was increased public concern about the rate at which ecosystems in the country are being stretched beyond their capacities.

“The Atewa range forest also protects and sustains three major river basins namely the Ayensu, Densu and Birim which are important sources of water for about five million Ghanaians. Therefore, its importance for sustainable long-term water for supply for domestic and agricultural use cannot be overemphasised,” she said.

She said the inauguration of BES-Net was to provide a platform for active participation and contribution of the private sector to the conservation of the Atewa Forest and the sustainable management of the river basins it feeds.

“The businesses have committed to support efforts at ensuring that the linkage is harnessed to provide a win-win situation where economic, social and environmental benefits are optimised for future generations,” she said.

The Deputy National Director of ARocha Ghana, Mr Daryl E. Bosu, said the threat on the Atewa Forest had become critical, particularly as announced by the finance minister in the budget of plans to go ahead with an integrated aluminium industry at Kyebi.

“The times, therefore, call for more strategic, inclusive and broad, as well as innovative approaches that yield the desired outcomes. To overcome the threat, it’s imperative that we harness the influence of all stakeholders, especially the private sector to chart a new direction for environmental sustainability in Ghana,” he said.

The International Union for Conservation of Nature (IUCN), ARocha Ghana, PricewaterhouseCoopers, the Forestry Commission and the Water Resources Commission are the implementing stakeholders of the project.

The Atewa Range Forest Reserve is among the remaining few virgin forests in Ghana and located in the Eastern region.

But for the timely intervention and vigilance of staff of the Forestry Commission (FC), illegal miners, popularly known as ‘galamsey operators would have destroyed it.

Atewa is touted an upland evergreen forest because of its botanical uniqueness in terms of floral richness and diversity.

It is on record to have 656 species of plants comprising 323 tree species, 83 shrub species, 155 twining and climber species, 68 herbaceous species, 33 epiphytes and five grass species.

Due to its rich biological diversity, Atewa reserve was designated as one of the country’s 34 Globally Significant Biodiversity Areas (GSBAs) in 1999, and in 2001 was declared to be among the nation’s 36 Important Bird Life Areas (IBLA) under the Important Bird Area Project implemented by the Ghana Wildlife Society.