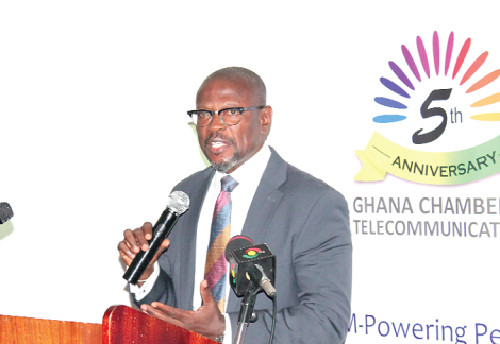 Telecommunication operators in the country paid a total of GH¢4.92 billion in taxes and other public fees to the government in the last five years.

The companies also spent a total of GH¢3.82 billion in capital expenditure and created more than 6,200 direct jobs and about 1.6 million indirect jobs over the same period under review.

The Chief Executive Officer of the Ghana Chamber of Telecommunications, Mr Kwaku Sakyi-Addo who made this known at the celebration of the chamber’s 5th anniversary in Accra, said the telcos have contributed immensely to the growth of the economy.

He said in the last five years, the number of SIM cards had grown nearly 70 per cent at a penetration rate of 134 per cent, while data connections had also doubled.

Additionally, he said the mobile money transaction, which was about GH¢400 million per annum had grown to GH¢35 billion and had reached GH¢30 billion in the first half of 2016.

Its establishment was in recognition that industry players were in a stronger position to make inputs to shape policy and the regulatory environment if they worked together.

The Chamber has, over the last five years, enabled key stakeholders, such as the government, industry regulators and lawmakers to engage telcos and tower companies together instead of as individual entities.

The industry had seen some tremendous growth over the years, however, Mr Sakyi-Addo added that “the path of the telecoms industry has not cushioned with roses”.

Issues on how telcos had helped to improve sectors of the economy of Ghana over the last five years and prospects of the next five years were discussed.

The CEO said the telecom companies were buffeted by a “less-than-ideal” macro-economic environment, noting that “the high energy tariffs had taken up to around 60 per cent of the companies operating costs”.

In addition, he said the depreciation of the Ghana Cedi was seriously hurting the industry since investments in the sector involved foreign exchange while their revenue was in cedis.

Notwithstanding the challenges facing the industry, Mr Sakyi-Addo said there were prospects for the next five years and beyond, adding that “opportunities exist for growth, for example, in mobile financial services and electronic payments”.

“There are opportunities for government to make strategic policy decisions that will enable mobile money to be utilised across sectors of the economy”, he stated.

He said the future of telecommunications was immense but could only be realised with policy and regulatory clarity, transparency and predictability to make it attractive for innovators and investors.

The deputy Director of Consumer and Corporate Business at the National Communications Authority, Mr Mawuko Zormelo pledged the regulator’s commitment to ensure transparency and clarity and continue engaging with the telecom companies to ensure that the industry grows.

In his submission, the Chief Executive Officer of CITI FM, Mr Samuel Atta Mensah said news production had evolved over the years although it has also created a problem in terms of quality control of data.

Legal practitioner, Ace Ankomah said life had become easier with the telcos and technology nonetheless he said the law profession needed to position itself to take full advantage of the technology.