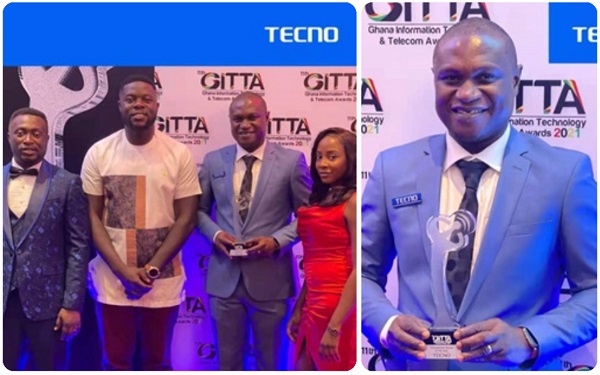 TECNO Mobile has been named the 'Smartphone Brand of the Year' at the 11th edition of the Ghana Information Technology and Telecom Award (popularly known as the GITTA Awards) held on October 29, 2021.

The event was organized by Instinct Wave to recognize, reward and showcase the pioneering ICT initiatives driving the Ghanaian private and public sector innovation with a vision of setting a benchmark to the region’s wave of development in ICT.

It will be recalled that in 2020, TECNO Mobile Limited was adjudged the smartphone brand of the year for its popular CAMON 16 series.

Its latest win is for premium and well sought after devices like the TECNO Phantom X and CAMON 18 Series, which recorded 2,000 pieces in pre-order sales alone, a milestone that organisers said "goes on to prove the level of acceptance and confidence Ghanaians have in the TECNO smartphone brand".

The award was also a confirmation of TECNO's commitment to bringing cutting-edge technology to its patrons.

The GITTA has become the benchmark of excellence that promotes and celebrates government, operators, ISP, Infrastructure providers, Fintech, Banks and other stakeholders.