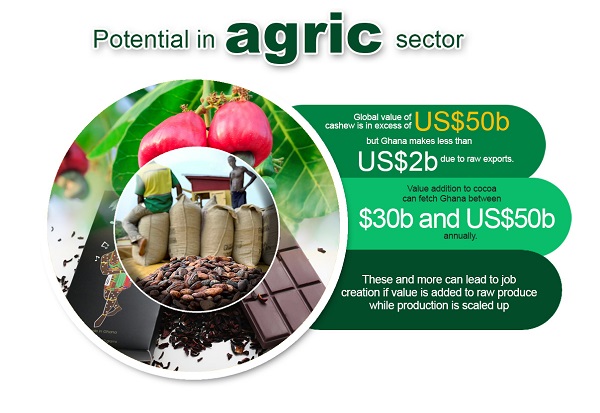 THE agricultural sector contributes significantly to gross domestic product (GDP), the monetary measure of goods and services produced in the country.

Due to the high demand for agricultural produce as food for humans and animals and also a major source of raw material for many industries both locally and abroad, the sector is seen as one with the best potential to absorb more people.

Unfortunately however, the sector has not received the needed support it deserves despite the numerous state interventions.

In search of solutions to reduce the high unemployment rate, stakeholders in agriculture have reiterated ahead of the Graphic Business-Stanbic Bank Breakfast meeting today, that the sector offers the best avenue for job creation in the country.

Consequently, they have asked the government to take pragmatic steps to make it attractive for the youth in particular to venture into it.

They reckoned that making agriculture attractive for the youth and the masses to enter would help prevent people from migrating from the rural areas to the urban areas in search of non-existent jobs.

potential for agricultural transformation, but to capitalise on this promising resource, we should aim to ensure that the sector is a more attractive option for the youth,” the General Secretary of the General Agricultural Workers Union (GAWU), Edward Kareweh, said in an interview on June 10, 2022.

Speaking on how employment can be promoted in the agriculture sector ahead of the Graphic Business-Stanbic Bank Breakfast Meeting on unemployment, Mr Kareweh said when agriculture production is promoted, the youth would be attracted there and they would not even be enticed by anything to move out.

“So, it is not only employment for them but one that will keep them. And because we have taken employment to their doorsteps, cost of rent, transport and the rest will be minimal since the major problem in the city is about rent and also about transport,” he said.

The second quarter breakfast meeting, which takes place tomorrow, June 14, is on the theme “Tackling Unemployment to Create Wealth – Opportunities for Ghana.”

For his part, the Chief Executive Officer (CEO) of the Chamber of Agribusiness, Ghana, Anthony Morrison, said the country could not develop when raw materials were always exported.

He said currently the global value of cashew was in the excess of US$50 billion whereas Ghana made less than US$2 billion because no processing were taking place in any of the value chains.

Again, he said in the global market, the value of products such as shea butter, coffee, mango dry fruits dwarf cocoa and others had increased.

He said that without adding value to agriculture produce, the country cannot reap much from exports.

According to him, among many other things, creating jobs was to establish a village or cottage industries which would invariably employ the youth to help process the raw export products into value added products.

“So, if we are able to add value to our raw materials, the country can easily make between $30 billion and US$50 billion from chocolate alone. The largest area we can create jobs is to add value. We must intensify our engineering in terms of fabrication, manufacturing of simple agriculture tools so that we will be able to process all our raw materials,” he said.

While recognising the challenges facing the agriculture sector, the stakeholders said the sector had been unattractive to especially educated youth who could apply their academic knowledge to boost productivity.

According to Mr Kareweh, arable lands were reducing due to competing interests.

Mr Morrison also raised concern about the rising cost of agriculture inputs such as seed, fertiliser and feed.

He said that all these made the sector unattractive.

“The cost of feed has gone up, cost of energy and cost of labour have gone up and so it is awkward to go into poultry at this time,” he said.

Mr Morrison was of the believe that the trend could be reversed to help reduce high unemployment levels in the country if agriculture was made attractive as a business through the implementation of deliberate policies in that direction.

“The young men and women are so intelligent and know what they want. You can’t force them into agriculture. Just ensure there is good market for agricultural produce while creating a conducive environment for people to venture into agriculture. Agriculture provides jobs for all, including even the low-level labour force.

“Ghana has a very young population that is largely unskilled. So, to get jobs for such persons, agriculture is critical and that’s why agriculture remains important in all economies aside from providing raw materials and food, among others,” he stated.