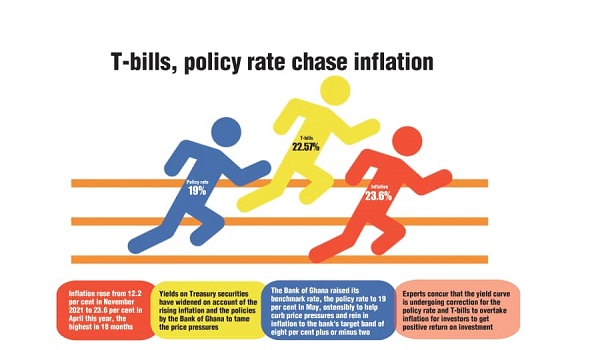 TREASURY (T) bill rates have surged to an eight-year high as investors seek healthier yields to compensate for the soaring inflation.

It is also on the back of the government’s growing appetite for domestic borrowing to finance development projects as it is unable to float Eurobonds.

Rates on the 364-Day bill and other securities have also risen to record highs – reflecting the fiscal strain (high interest payment and faster debt accumulation) that inflation and the general macroeconomic imbalances are putting on government finances.

High T-bill rates are punitive to the government, businesses and households.

“It compounds the public debt problem, erodes the profits of firms and fuels cost of living for the citizens,” an economist, Dr Said Boakye, and a senior financial analyst, Alex Boahen, told the Graphic Business in separate interviews on June 3.

With the government locked out of the international capital, Dr Boakye, who is the Head of Research at fiscal policy think tank, the Institute for Fiscal Studies (IFS), said rising T-bill rates meant that the government would pay more to borrow internally.

That, he said, would increase the cost of interest payments, thereby compounding the debt crisis.

The debt stock peaked at GH¢391.9 billion in March this year, equivalent to 78 per cent of gross domestic product (GDP).

Last year, interest payments accounted for about 49 per cent of total revenue.

The 2022 Budget now estimates that it will decline to GH¢37.5 billion, equivalent to more than 37.6 per cent of the year’s revenue target.

Data from the Databank Group and the Bank of Ghana indicate that the current T-bill rates were the highest since December 2015.

They then resumed a downward trend from 2016 amid intermittent blips before reversing course late last year to now peak above 22 per cent as at June 3.

With inflation yet to peak despite being in the mid-20s, analysts have concurred that T-bill rates could climb above 26 per cent by the end of the year.

“For businesses, high T-bills mean that their cost of operations will go up and we are already seeing that across manufacturing firms,” Mr Boahen, who is the Head of Research at Databank, said.

“If you look at FanMilk, Unilever, Guinness Ghana Breweries, among others, you will notice that they are taking in good revenue but cost is also biting off a large size of their pie.

“As for the revenues, they are making them but it is not translating into profitability because their costs have gone up. “Companies with leverage on their balance sheets – loans – also face higher interest costs and all these affect their profits and ultimately, productivity,”
he said.

The President of the Association of Ghana Industries (AGI), Dr Humphrey Ayim-Darke, said the association had already petitioned the central bank in search of reliefs for members.

“It is challenging in the sense that high T-bill rates entice the banks to lend to government.

“The banks also use that to raise their lending rates and that worsens the situation for us in the manufacturing sector,” Dr Ayim-Darke said on June 2.

AGI, a leading advocate for manufacturing firms, has long flagged access to and cost of finance as the top challenges undermining their potentials.

Beyond the surging inflation, the tight monetary stance by BoG to help control the price pressures is fuelling the rise in T-bill rates.

The central bank’s policies have mopped up in excess of GH¢7 billion from the system since January, resulting in fewer money chasing more T-bills.

This drives up the rate at which the government borrows from the public, Databank’s Head of Research said.

Mr Boahen, who has more than 20 years of experience, and Dr Boakye of the IFS, said T-bill rates should be expected to rise further as investors were not even enthused with the current yields.

“When you have T-bill yields lower than inflation, it means that investors are not getting real return on their investment.

“It means that there is negative return and that is why, if you have noticed, the government has been missing its auction targets since inflation started climbing up,” Mr Boahen said.

“We do not see inflation ending the year below 20 per cent and what that means is T-bill rates should also be expected to remain above 20 per cent and a little higher than inflation,” he added.

Meanwhile, checks from some of the banks shows that, none is quoting up to 20 per cent for the one-year note, a development which confirms the position of analysts regarding the impact of the high T-Bills quoted by the central bank.