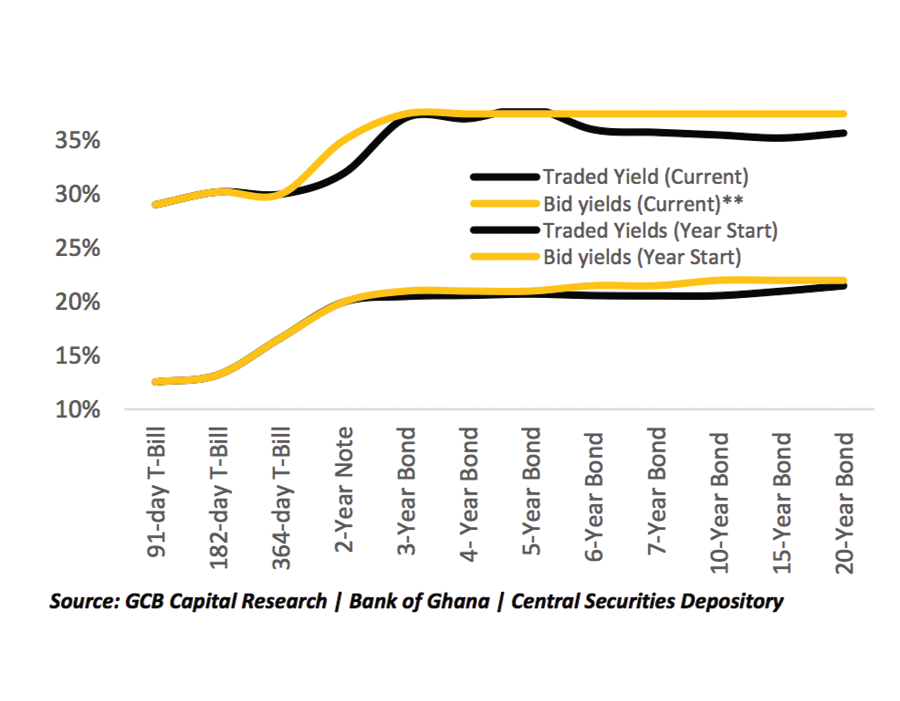 THERE was active trading on the Ghana Fixed Income Market (GFIM) last week as investors took advantage of the rising yields to make gains.

Aggregate turnover on the secondary bonds market picked marginally last week with an aggregate volume of bonds worth GH¢2.41 billion.

The amount represented an increment of 6.64 per cent over the previous week’s trade.

GCB Capital said in its weekly market update that while the trades cut across the curve, the 2023 to 2025 tenors dominated activity.

It said those bonds accounted for 58 per cent of the volumes traded for the week.

It said the trades settled around 35 per cent, with the back end approaching 40per cent at the week's close as GHS liquidity levels tightened.

Given the weak market sentiments and the elevated near-term risks, GCB Capital said it expected investor appetite to favour treasury-bills and bonds with residual maturity of fewer than five years.

“At the moment, nominal yields range between 35 per cent and 40 per cent across the curve, and we expect the government to hold off longer-dated issuances in the near term.

“In the interim, the government could continue to pick up excess offers at the T-bill auction in the absence of any refinancing obligation to avoid locking in a higher cost of funding.

“However, this strategy increases the risk of Bank of Ghana (BoG) deficit financing, which could sustain the inflationary pressure and weigh on the risk premium investors will demand,” the company said in the weekly report.

Investor appetite for T-Bill remained intense, albeit at a higher cost, with the demand and uptake worth GH¢1.78 billion at the latest auction.

The demand exceeded the maturities that were due on September 5 by 13 per cent.

Yields on the various bills also crossed the 30 per cent level last week, with the 91-day now at 29.05 per cent, having risen by 43 basis points (bps).

GCB Capital said it expected the T-Bill yields to sustain the up tick.

It said the benchmark 91-day yield could also reach 30 per cent over the next fortnight.

Investor demand for T-bills remained strong amidst the elevated near-term risks, and the government’s continued record of excess demand.

Demand and uptake at the latest auction of 91-day to 364-day bills raked in GH¢1.78 billion against an issuance target of GH¢1.72bn.

“With BoG’s latest directive kicking in, the cash reserve ratio has increased by one per cent to 13 per cent from September 1.

Ghana's Eurobond curve remains elevated, with the front part of the curve clearing above the 30 per cent levels as near-term risks and the weak external balances drive bearish sentiments.

The market for Ghana credit was volatile last week, with low liquidity in the benchmarks.

The government will target a gross issuance of GH¢1.68 billion at the next auction of 91-day and 182-day bills to rollover upcoming T-Bill maturities estimated at GH¢1.57bn.

While we expect oversubscription at the auction as there are competing offers in the week ahead, yields could continue to climb higher as cedi liquidity levels continue to tighten.