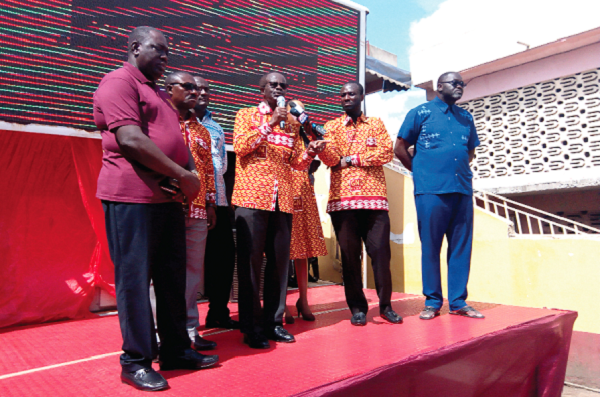 The President of Groupe Ndoum, Dr Papa Kwesi Ndoum has appealed to customers of the GN Bank to cease panic withdrawals that have hit the bank in recent times.

He said the withdrawals were rather affecting the bank since it could not only survive on payment of funds.

Speaking to traders at the spare parts retail market at Abosey Okai in Accra on October 3, he assured customers that the bank was financially sound and was not going to fold up.

“You should have confidence and stop withdrawing funds with the fear of their misappropriation,” Dr Ndoum told customers.

He is on a ‘stop the panic withdrawals and strengthen our indigenous banks’ tour in the Greater Accra Region and subsequently to other regions in the country.

Dr Ndoum explained that, “when 100 people bring money to the bank, what we do is to invest them. So, if about 15 to 20 per cent of all these customers decide that they will withdraw all their deposits within a day, there will be a problem.”

He said it was imperative to speak with the people because it was normal behaviour to lose confidence, especially when other local banks had been consolidated and others folding up.

“What we are making people understand is that, when there are problems and the banks cannot be operational, the Bank of Ghana (BoG) will intervene with strong steps to safeguard depositor’s funds,” he noted.

He ,however, bemoaned that the brunt of the panic withdrawal was on indigenous banks, especially though they contributed immensely to the development of the country.

Investing in local banks, he mentioned, was the only and surest way for sustainable development in the country.

“If we make profit, it stays in the country for developmental projects, unlike a foreign bank that will send his profits to its home country,” he added.

Dr Ndoum revealed that by the end of 2018, the GN Bank would have provided the BoG with the minimum capital of GH¢400 million.

He ,however, stated that the bank was not merging because it would not  be able to raise the minimum capital alone but would merge on the ticket of establishing a strong indigenous bank.

“Merger is not necessarily to reach the GH¢400 million capital requirement. People have been distorting this that ‘if you can’t raise the GH¢400 capital, then merge,” he added.