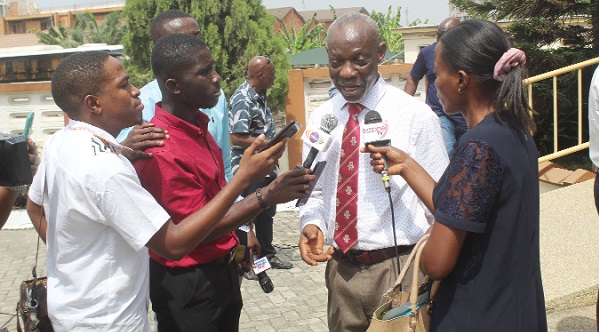 Retirees who hold sovereign bonds have appealed to the government to exclude their investments from the domestic debt exchange programme (DDEP).

At a press conference in Accra yesterday under the Pensioners Bondholders Forum, the retirees, numbering about 200, each of whom holds a government bond, said capturing their investment in the debt swap programme would have negative consequences on their livelihoods and those of their families.

The Convener of the forum, Dr Adu Anane Antwi, explained that most of them had made investments in government bonds, with the expectation that the coupons (interest payments) would supplement the “meagre” pensions they received through the tier one pension scheme under the Social Security and National Insurance Trust (SSNIT).

“Our monthly pensions from SSNIT have been eroded by inflation, to the extent that these coupons have become our core income, while waiting for the payment of the principal amount on maturity,” he said.

Dr Anane Antwi, who is a former Director-General of the Securities and Exchange Commission, explained that given that the ‘Amended and Restated Exchange Memorandum’ terms of the DDEP extended to 15 years, there was no guarantee that many of the pensioners would live long enough to benefit from their investments.

An eerie and emotional atmosphere engulfed the VAG Hall in Accra where the media briefing was held, as leaders of the forum took turns to recount the chilling experiences and feelings of retiree bondholders who were unable to come to terms with the suggestion that they would not receive any amount from their investments this year.

They could not accept the proposal that their lump sum pensions invested in government bonds were going to see less than promised coupons which, together with principal investments, would mature in over 15 years.

Although they did not agitate but were rather composed and calm, it was visible in their accounts how disappointed and disturbed they were as they made passionate demand on the government to exclude them.

During an interaction with the media, one of them fell from his chair, and it took many of his frail companions to lift him up to his seat.

Under the government’s DDEP, domestic bond holders have been asked to exchange their instruments for 12 new bonds, one maturing each year, starting from January 2027 and ending January 2038.

However, organised labour, on December 22, last year, reached a deal with the government to exempt pension funds from the DDEP to safeguard the future investments of workers in the country.

Dr Anane Antwi said the government must, on “compassionate grounds”, grant their request for exemption, in line with the exemptions granted pension funds.

“The basis for the exemption of pension funds is to ensure that pension incomes for retirees are not impaired for them to become burdens on others when on retirement.

“We believe strongly that the basis for the exemption granted to pension funds holds good for the exemptions of the investments of pensioners in government bonds from the DDEP,” the former Director-General of the SEC, who is also a lawyer and chartered accountant, said.

A retired banker, Richard Akoladza, told the Daily Graphic that he had invested about 80 per cent of all he earned during his career in the bonds, with the hope of becoming financially comfortable during retirement.

“Most of us worked hard, and because of what was going on with the banking sector, we decided to put our funds in the least risky investment, which is government bonds, but today we are caught in a situation where this whole year we are not going to receive anything,” he lamented.

Mr Akoladza added that although he received SSNIT pension income, it was not enough to absorb all his expenses and that of his family.

“That is why we are asking the government to take a second look at the issue because just telling us that we will not get anything for the next one year is wicked, to say the least,” he asserted.

Another pensioner, who only identified herself as Joyce, asked if she was not blessed enough to live long enough to enjoy the fruits of her labour if the government did not exclude pensioners from the programme.

“When my fund managers called me to explain that I would get the full value of my investment in 2038, I asked them if they knew my age now and whether in 15 years I would be around to enjoy my investment,” she said.

She, therefore, called on the government to negotiate with the forum in order to reach a mutually beneficial ground.