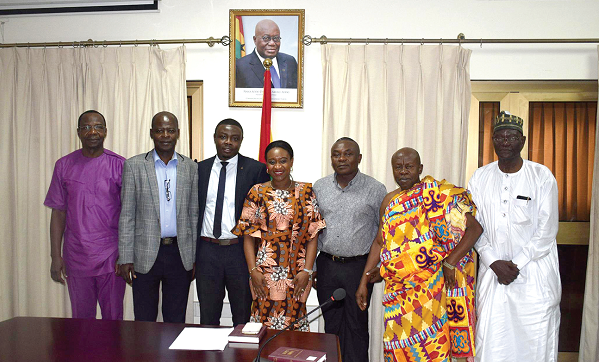 PIAC members with the deputy Minister of Finance, Ms Abena Osei–Asare, after the swearing in ceremony. Follow @Graphicgh

Membership of the Public Interest and Accountability Committee (PIAC) – the committee with oversight responsibility of the management of the country’s petroleum resources – has been reconstituted following the expiration of the tenure of some members.

The new members, who were sworn in together with some old members who had their tenure renewed for two years, took the official oath and the oath of secrecy.

The former Vice Chairman of PIAC, Mr Kwame Jantuah, who was the representative of the Civil Society and Community-based Organisations, has been replaced by Mr Noble Wadzah while Ogyeahoho Yaw Gyebi II has joined the committee as the representative of the National House of Chiefs replacing Osabarima Kwaw Entsei II, the Omanhene of the Mpohor Traditional Area in the Western Region. The Federation of Muslim Council and Ahmadiyya Missions, Ghana, that was initially represented by Mr Mohammed Affum now has Alhaji Abdulai Alhassan on the PIAC.

Two other members, Mr Joseph Winful representing the Institute of Chartered Accountants, Ghana, whose tenure was renewed for another two years and Rev. Dr Kwabena Opuni-Frimpong of the Christian Council of Ghana who is to replace Mr Samuel Zan Akologo of the National Catholic Secretariat representing the Christian Groups were not available and would, therefore, be sworn in later.

Speaking on behalf of the committee after the swearing in, Dr Steve Manteaw made a firm commitment to working to achieve the three-pronged mandate of the committee and to ensuring citizens access to information, as well as transparency in the management of the petroleum revenue.

Prudent use of revenues

A Deputy Minister of Finance, Ms Abena Osei–Asare, said PIAC had become a key partner with other stakeholders in the quest for transparent and accountable management of petroleum revenue for the benefit of the people of Ghana.

She said a strong accountability institution had been achieved in PIAC over the years and, therefore, the new members would be required to bring their innovative ideas and solutions to bear as members, and make their presence felt on the committee.