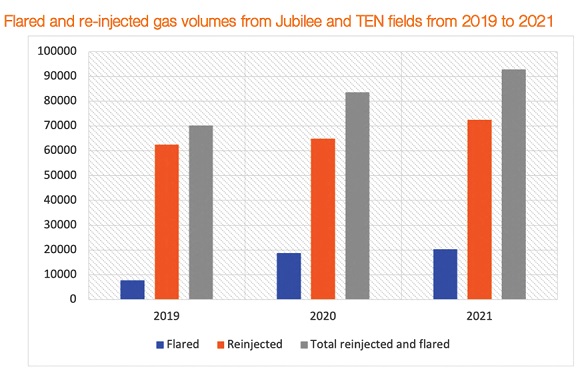 The country lost 47 billion cubic feet (bcf) of gas to flaring between 2019 and 2021, the African Centre for Energy Policy (ACEP) has disclosed.

The energy policy think tank said the gas flared was valued at $300 million and amounted to money that went down the drain as a result of limited investments in the gas subsector.

In a report titled ‘The state of the energy and extractive sectors of Ghana: Critical reforms required for sustainable economic recovery,’ the ACEP said the gas was flared at a time when domestic consumption of processed gas, known as liquefied petroleum gas (LPG), was growing exponentially, leading to increased imports.

Consequently, it noted that increased investments in the gas subsector were urgently needed to increase domestic gas supplies, reduce imports and raise the value that the economy derived from the resource.

The report, which was released last month, examined the state of the energy and extractive sectors, the performance of the respective state-owned enterprises (SoEs) and proffered solutions on how to maximise the national interests from the two industries.

It also examined the state of the two sectors following the COVID-19 pandemic and suggested ways to quicken the recovery.

The ACEP said the recent geopolitical issues and their impact on global commodity prices underscored the need for Ghana to focus on developing its domestic gas assets, which required investment.

It said the decision to import gas had implications on how much investment Ghana could attract for domestic production and the ability of the country to optimise existing infrastructure, which was contrary to the communicated capacity of domestic sources by the operators – Tullow Ghana and Eni.

Quoting from Tullow Ghana’s 2021 annual report, the energy think tank said the company stated that its investment in gas handling infrastructure on the Jubilee floating, production, storage and offloading (FPSO) vessel and the ability to supply Jubilee & TEN gas gave it confidence that it could meet growing domestic demand and be the most competitive supplier of gas into the Ghanaian market.

“This, however, requires investment in upstream gas production and midstream gas processing infrastructure. Therefore, if the risk level is high, investments will either come at a higher premium or may not,” ACEP said in the report.

“The government’s plan to expand the existing Gas Processing Plant (GPP) has been on the drawing board for many years. The expansion plan was to receive additional gas from the Jubilee/TEN fields and other discoveries.”

It said, “instead, gas that could have been used for power generation and other industrial use is either flared or re-injected because the capacity of the existing GPP cannot process the additional gas from the fields”.

On the volume of gas flared, ACEP said data indicated that about 246 bcf of gas was either flared or re-injected between 2019 and 2021.

“Out of this quantity, about 46.8 bcf was flared while 199.8 bcf was re-injected. The flared gas from Jubilee and TEN fields could account for a daily supply of about 50 million standard cubic feet per day (mmscfd) if the GPP were expanded as scheduled.”

“In addition, the cumulative volume from re-injected and flared gas could provide an additional volume of over 100mmscfd from the Jubilee and TEN fields, enough to meet Ghana’s medium-term gas needs.”

“Again, gas delivered from the expanded GPP to power plants and non-power users could be another revenue-generating source for the upstream gas sector. The total flared volume of 47 bcf accounts for a forgone gross revenue of about $300 million in addition to the allied benefits as indicated above,” ACEP said.

The report said the Sankofa Gye Nyame (SGN) field had been supplying about 210mmscfd of gas, significantly above the take or pay commitment of 159mmscfd. The existing infrastructure on the field also had an estimated capacity of about 260mmscfd without additional investment, providing an extra volume of 50mmscfd from SGN.

“Again, other discoveries in the area, such as the Akoma and Afina discoveries, require investment for appraisal and possible tie-in to the FPSO J. A. Kufuor.

“The current developments in the nation’s upstream have the potential to meet Ghana’s gas demand. Therefore, the government's focus must be to optimise those resources rather than imports,” it said.

“Optimising domestic sources provide a wide range of fiscal and non-fiscal benefits to the state. These include job provision, local content development, technology development, and increased government revenue from corporate taxes, pay as you earn (PAYE), tax on services among others,” it added.