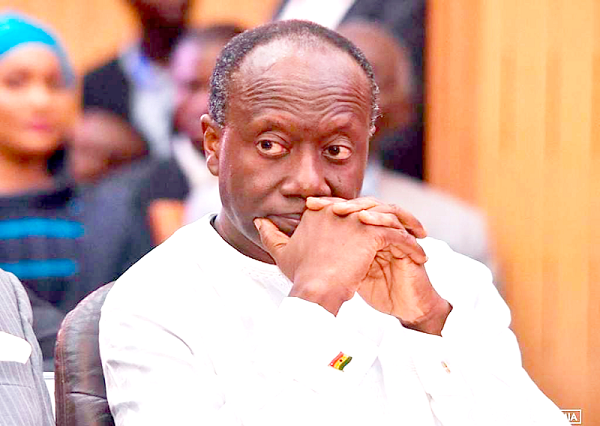 THE 2022 budget will be the country's litmus test of investors' faith in the economy.

It follows ongoing jitters over debt levels and the ability to service them, a sluggish fiscal consolidation and the heightened sell-offs of Ghana’s bonds in October.

The developments signal investors’ doubts about the government’s ability to keep the economy together and next year’s budget, which is scheduled to be presented tomorrow, is the best widow of opportunity to assure the investor community that a workable plan is underway to correct the fiscal slippages for the deficit to fall back to the five per cent of gross domestic product (GDP) ceiling, reduce the debt growth and shore up revenues to help protect their investments, especially those in the debt market.

In the first seven months of the year, revenue inflows have disappointed, missing the target by 11.6 per cent. The fiscal deficit was also 6.1 per cent of GDP, higher than the period’s target of 5.7 per cent of GDP, while the debt stock remained elevated, hitting a grime milestone of GH¢335.9 billion, equivalent to 76.4 per cent of GDP.

The assurance is, therefore, necessary to ensure that the country regains investor confidence and retains access to the international financial market in 2022 for the purposes of borrowing.

At a time when revenue growth has hit record lows and spending pressures continue to surge, protecting investor confidence is critical, given that borrowing has become the only credible option to funding the budget.

The Minister of Finance, Mr Ofori-Atta, has said that the country will opt for borrowing over a programme with the International Monetary Fund (IMF) – dismissing concerns that Ghana was a candidate for a bailout.

It is not clear whether the decision by the Finance Minister is based on the fact that about 80 per cent of the country’s debt is more of commercial loans and just about 20 per cent being concessional loans and therefore there is nothing much to gain should it opt for the IMF programme that will limit its appetite for what experts describe as “fat but expensive loans”.

Already, the government was forced to abort plans to sell a US$2 billion sustainable bond earlier this year after credit conditions tightened and interest on the country’s debt slumped.

This was after it had returned to the Eurobond market once every year to raise a combined amount of US$10.2 billion between 2017 and 2020.

Back home, patrons of domestic debts have been exhibiting signs of fatigue from the onset of this year: They have largely failed to take up all auctions, creating a deficit that has sustained rates.

It is becoming clear that the government has a Herculean task of using the 2022 budget to show the investor community that it has a credible plan to fiscal consolidation. This is necessary to sustain confidence and ensure market access for any planned debt sale.

“Trust is what is holding the country now and it is part of what is holding the exchange rate and the macro indicators together. If investors lose the final bit of it, then it will be messy,” an Economic Analyst, Dr Said Boakye, told the Graphic Business on November 14.

“In spite of everything, I think there is still that bit of confidence that the government can turn things around; that revenues can grow, the debt levels can come down and things will be efficiently managed. This budget must now actualise that.”

“It if fails, I am afraid things will turn out terrible,” the Head of Research at the Institute for Fiscal Studies said.

In addition to expenditure pressures, revenue has disappointed, with collections turning out lower than budgeted, year-in, year-out.

While the ritual of missed revenue targets since 2017 is largely blameable on ambitious projections, the decline in the ratios to GDP shows that the revenue potential is not fully exploited.

Dr Boakye said investors would be eager to know what the government’s plans were from that angle.

He said the debt situation required that the country exhibited superior credibility in bridging the fiscal gap without resorting to too much borrowing.

But with the economy recovering from the pandemic (slower than expected), taxpayers exhibiting signs of fatigue and cost of living generally up, one wonders how popular revenue measures can be with the populace.

The country has failed in the recent past to bring new constituents into the tax bracket, resulting in the tax burden being shouldered by the existing few – the estimated 1.2 million taxpayers and the few businesses in the formal sector.

At best, they represent great potentials that could materialise in the future.

The current economic situation requires immediate solutions and a boost to revenue would do more than half of the work although it has to be weighed carefully against the peculiarity of the situation.

While at it, efficiency in public spending has never been this relevant. The market might have tolerated the inefficiency at a time we were deemed capable of handling our own situation, not when the doubts have now become louder.

This is why a resounding commitment to efficiency with clear cut strategies and timelines will be critical in the 2022 budget.

Also, the attempt to grow a troubled economy through increased spending rather than through consolidation has failed. The country needs to prioritise consolidation over spending through which it can stabilise the fiscal situation to allow for natural growth to resume.

Just like the 2014 budget, next year’s budget will be critical in determining the direction the economy takes, and the more realistic and sober the budget is, the better for all.