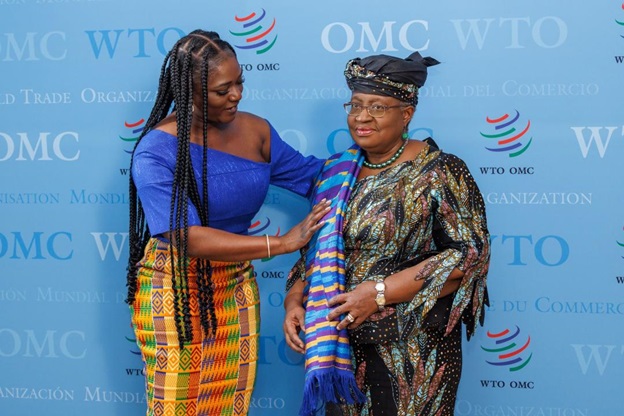 Being the first woman and first African to lead the WTO as Director-General, Okonjo-Iweala adds to the list of globally renowned female dignitaries and personalities who are associated with the awards.

Receiving the award in person at the WTO offices in Switzerland on March 11, 2022, Okonjo-Iweala said, “I am honored to have received the GUBA Achievement Award in the name of Nana Yaa Asantewaa, one of the fiercest women in African history who fought the British to a standstill in 1900”.

She commended GUBA for celebrating and recognizing the contribution of Black women in the diaspora and Africa, to the growth and progress of continental Africa.

GUBA Enterprise’s President and CEO, Dentaa Amoateng said, “I had the honour of personally meeting and presenting Dr Ngozi Okonjo-Iweala with her Nana Yaa Asantewaa Award this week”.

“GUBA started as a dream and to meet Dr Ngozi was so significant. She exemplifies what it is to be a ground breaker, a world changer and has demonstrated that there is no limit to what one can achieve. In the lead up to my birthday, I am motivated that this is just the beginning and anything is possible for women particularly Black women across the globe” Dentaa Amoateng said.