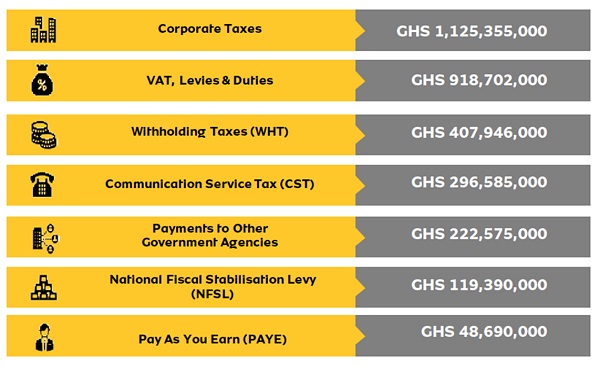 TELECOMMUNICATIONS giant, MTN Ghana, has posted a profit after tax of GH₵2 billion for the 2021 financial year.

This represents a 43.5 per cent increase in the previous year’s figure of GH¢1.13 billion.

The company also made a fiscal contribution of GH₵3.1 billion of which GH₵2.8 billion was paid to government in direct and indirect taxes.

The figure represents a 35.8 per cent of the company’s total revenue.

At the company’s annual general meeting, the Chairman of the board of MTN Ghana, Dr Ismael Yamson, said: “After reviewing the full year performance of the company in 2021, the board shall be recommending a final dividend of GHp 8.5 on ordinary shares.

“This is further to the interim dividend of GHp3 per share declared by the board after reviewing the half year performance of the company.

This brings the total dividend for the year 2021 to GHp11.5 per share and represents 70.6 per cent of profit after tax,” he stated.

Dr Yamson said the company was committed to being a strategic partner to Ghana’s development, noting that over the years, MTN had won various awards as the highest taxpayer in Ghana.

“In line with our commitment to creating shared value, we continue to make significant contributions through the creation of direct and indirect employment opportunities impacting over 500,000 Ghanaians, as well as interventions to support our people, our cherished customers and other key stakeholders through the socioeconomic challenges brought about by the pandemic,” he stated.

The Chief Executive Officer of MTN Ghana, Selorm Adadevoh, for his part, said the company delivered a strong financial performance to crown the year which marked its 25 years of operation.

“We delivered strong financial results in line with our market guidance and achieved growth across our key business segments in a world that continued to be impacted by COVID-19,” he noted.

He said service revenue grew by 28.5 per cent, driven mainly by increased investment in the network and delivery of commercial initiatives which resulted in growth of its customer base and demand for its services.

He said the growth in subscriber numbers, product enhancements and innovations around customer value management supported growth in voice revenue by 4.9 per cent to GH₵2.6 billion.

He pointed out that the contribution of voice to service revenue, however, consequently declined from 41.8 per cent to 34.1 per cent, in favour of increased contributions from data and mobile money.

“Data revenue grew by 56.3 per cent to GH₵2.8 billion. This was a result of increased data traffic (+54.9 per cent) owing to various commercial interventions, improvements to the network, changes in consumer usage behaviour and an increased number of smartphones on the network.”

“The contribution of data to service revenue increased from 29.6 per cent to 36 per cent in line with our revenue diversification strategy,” he stated.

He said active MoMo users also recovered from the challenges in the first half of 2021 to achieve a growth of 3.8 per cent.

“We expanded our MoMo distribution and footprint across the nation through the growth in active agents (+18.7 per cent),” he said.