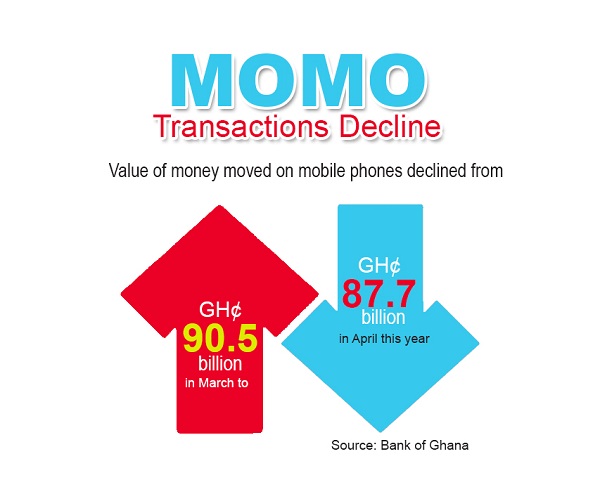 The value of Mobile Money (MoMo) transactions which peaked in March this year suffered a decline the following month.

Data from the Bank of Ghana (BoG) showed that the value of money moved on mobile phones declined from GH¢90.5 billion in March to GH¢87.7 billion in April this year.

The decline in the value of MoMo transactions bucks the trend that emerged from December last year, when the controversial Electronic Transfer Levy, Act 2022 (Act 1075) was announced in November.

The BoG data showed that the decline in money moved on the mobile phone-based platform between March and April was GH¢2.8 billion, equivalent to about 3.1 per cent, within the period.

While the number of transactions also fell from 413 million in March to 403 million in April, the amount of money on MoMo float rose from GH¢9.5 billion to GH¢9.6 billion within the period, the first in the year.

The fall in transactions in April came after MoMo transactions witnessed one of their biggest month-on-month growths in March.

The data, which was released ahead of the central bank’s Monetary Policy Committee (MPC) press conference on May 23, indicated that the transactions grew by about 18 per cent from GH¢76.8 billion in February to GH¢90.5 billion in March.

The growth in March was also the second in a row, coming after a similar growth in February, albeit negligible.

The transactions rose from GH¢76.2 billion in January to GH¢76.8 billion in February, the first growth to have been recorded since November when the E-levy was announced.

The peaking of transactions in March and the subsequent fall in April came before the commencement of the implementation of E-levy on May 1.

The introduction of the levy, which exacts 1.5 per cent of every daily transaction above GH¢100 as tax to the government, was met with agitations and protests from the public and Parliament.

Experts say the rise and fall in the transactions in the two months leading to its implementation reflected the anxiety and adjustments among consumers and the market prior to the May 1 implementation date.

They pointed to the various reports of customers rushing to complete transactions, increasing their withdrawals and limiting deposits as some of the anecdotal evidence that gave rise to the data recorded for March and April.

The Commissioner-General of GRA, Reverend Dr Ammisshaddai Owusu-Amoah, told the Graphic Business in April that the authority had anticipated transactions to suffer declines before stabilising.

Dr Owusu-Amoah said it was normal for people to react to any new tax, especially one on MoMo, but said measures put in place would ensure that public trust in the service was restored after the initial jitters.

He mentioned the decision to exempt the first GH¢100 of every daily transaction and the exemption of bank-to-bank transfers as some of the policies used to retain public confidence in the service.

On the revenue target, Dr Owusu-Amoah said it had been revised downwards to GH¢4.5 billion from the initial GH¢6.9 billion.

The commissioner-general explained that the revision followed the reduction in the rate from 1.75 per cent to 1.5 per cent, the delay in implementing the levy, the negative sentiments that heralded the proposal of the levy and internal estimates by GRA that showed that MoMo transactions would slow down in the first days of the levy before picking up.

The levy was initially programmed to take off in February and would have covered all electronic transactions, including bank transfers.