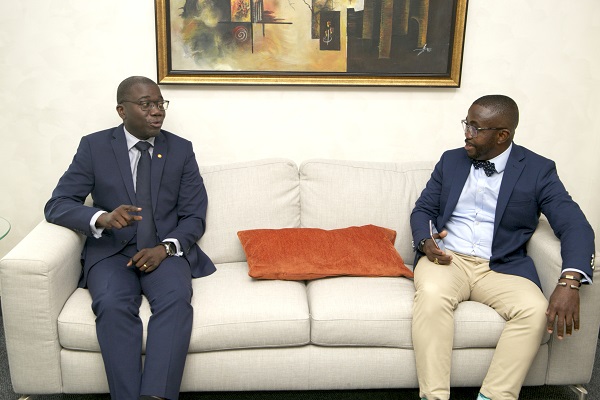 AS part of measures to accelerate the government’s drive to increase youth employment, especially for recent graduates, Fidelity Bank Ghana, has committed to use the Fidelity Young Entrepreneurs Fund to support the government’s objective.

The bank, one of the strongest and the largest privately-owned Ghanaian bank, will collaborate with the government’s YouStart programme, a vehicle to support the youth to develop commercially viable businesses. Through this collaboration, Fidelity intends to help young entrepreneurs gain access to capital, and provide training, technical skills and mentoring to enable young entrepreneurs to launch and operate their businesses.

“We are a partner to YouStart and we are going to play a more active role in supporting the government through the YouStart programme,” the Managing Director of Fidelity Bank, Julian Opuni, said in an interview with the Graphic Business as part of a series to have chief executive officers and managing directors to discuss issues of national importance and the role of their institutions in that effort to return the country back to higher and sustainable growth.

“Before YouStart was introduced, we had established the Fidelity Young Entrepreneurs Fund to address some of the pain points that young entrepreneurs were facing with respect to access to capital. We decided to create a programme with reduced capital access requirements that were more tailored to appreciate the potential of these small-scale enterprises, particularly those that were not at full growth stage.

In the area of training, Mr Opuni also noted that for those businesses that are not ready for financial support, “we offer training and capacity building, including business plan assistance.”

To augment their support for young entrepreneurs, he added that the bank partnered with the Dutch government on a project called Orange Corners where young entrepreneurs were provided with access to additional funding and specialised training, among other things.

Mr Opuni said that the bank through its Orange Corners programme had worked with three cohorts comprising of 30 Micro, Small and Medium-sized Enterprises (MSMEs) with loans disbursed to 27 of them and is currently on its fourth cohort made up of 14 MSMEs.

On how much was used for the pilot, Mr Opuni said “Our pilot fund was GH¢10 million, and about half of that has been disbursed. We focused on businesses led by entrepreneurs ranging from 18 to 40 years old. Additionally, our objective was to identify those businesses that show promise.”

The Fidelity Bank MD said the bank expected that going forward, a higher percentage of the bank’s loan portfolio would expand beyond the youth segment into the broader SME sector which was reflective of the reality of the market. He noted that in 2021, Fidelity Bank disbursed a total of approximately GH¢485 million to the various SME subsectors of the economy, including Agribusiness, Health, Education, FMCGs, Youth businesses etc.

Mr Opuni said that as much as SMEs were classified as risky to do business with, the bank had devised innovative means to address the needs of SMEs while minimising the perceived risks.

Asked about the future for SMEs, Mr Opuni said: “The future remains bright for SMEs as they will continue to drive the economy. The onus is on the banking sector to continue to positively impact the SME sector. When speaking of the economy, banks will have to innovate and find a way of growing the economy and a vibrant SME sector is key to the growth of the economy. Quite frankly, if the economy in Ghana stagnates, banks in Ghana will stagnate.”