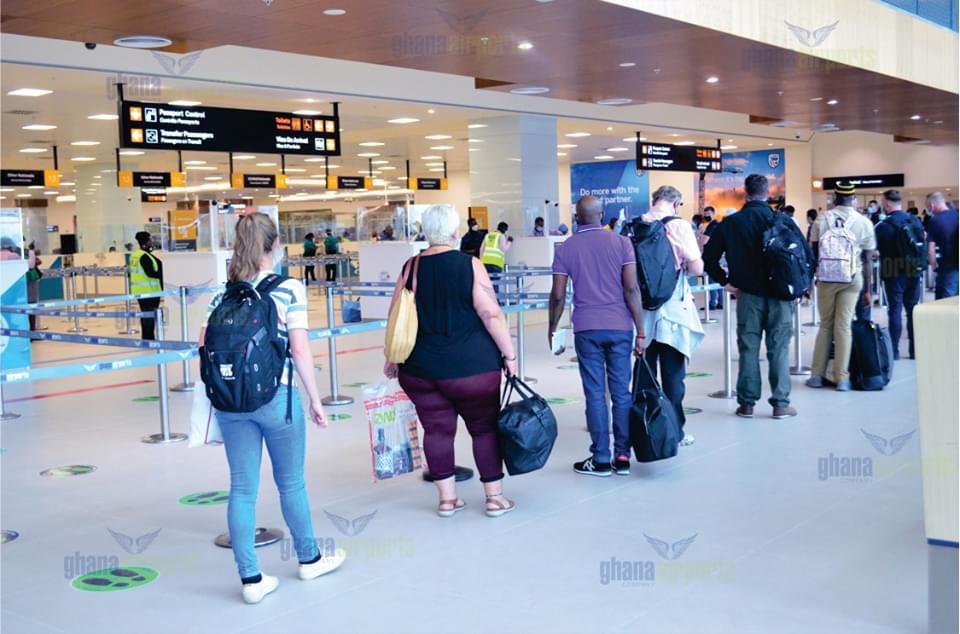 The Kotoka International Airport (KIA) has reopened for commercial and international passenger flights, five months after it closed its gates to the world as part of the restrictions on movement to contain the spread of the coronavirus disease (COVID-19) pandemic in the country.

The voices of airport announcers were heard on the public address system at Terminal Three, welcoming passengers into the country, while at the same time reminding them of the COVID-19 protocols they needed to comply with.

Those who arrived yesterday were made up of evacuees whom the Ministry of Foreign Affairs and Regional Integration had facilitated, diplomats, willing Ghanaians returning home, as well as foreign nationals who had business to transact in the country.

Unlike previous arrangements, all passengers are now required to take mandatory tests at the airport after arriving in the country.

However, the Daily Graphic team stationed at the airport observed that travellers who arrived on the opening date went through different arrangements. While some of them passed without being subjected to a polymerase chain reaction (PCR) tests because they had certificates to set off exemption from tests, another category was picked up by the Operation COVID Safety buses stationed at the airport, amid security escort, to begin their mandatory 14-day quarantine.

The second category of passengers who went through the new regime came out of the Arrival Hall one after another in a staggered process with their luggage after going through the mandatory testing.

Data sourced from the Ghana Airports Company Limited (GACL) indicated that about 200 passengers on the three chartered flights who arrived were tested using the new PCR machines installed at the airport.

Also present were some members of the GACL Board of Directors, led by its Chairperson, Mrs Oboshie Sai Cofie.

When he visited the airport to observe the process at first-hand, the Minister of State at the Ministry of National Security, Mr Henry Quartey, confirmed the two developments, explaining that passengers who had arrived under the previous regime had been aided to start their mandatory 14-day quarantine, while those on the new arrangement had also gone through the mandatory testing.

"I will be surprised if any passenger says he or she didn't go through the testing process. But we have categorised the passengers into three groups: stranded Ghanaians outside, those outside doing government business and those on their own private business outside,” he explained.

Mr Quartey added that some of the passengers had been aided to undergo their mandatory 14-day quarantine and the rest had gone through the testing process.

He said the current arrangements at the airport had been arrived at following a series of consultations among all stakeholders.

"Today, the airport has been reopened. It is the first day and so if there are any challenges, when we access the data and information from the technical team, we shall address all the challenges," he added.

The passengers, meanwhile, expressed mixed reactions over the $150 (GH¢865) cost for the COVID-19 test at the airport.

A passenger from the USA, Naana Sefa, said the new installations at the airport to curb the spread of the virus were impressive but too expensive.

"Comparing them with the system in the USA, where it takes three days before results from the tests are ready, I think this is an impressive development and a step in the right direction for Ghana," she said.

A passenger and student from Germany, Mr Ernest Kume, said his test result had been ready in 24 minutes, although he had to join a long queue for about two hours before taking his turn when he arrived.

He said the test conducted in Germany took three days, and for that reason Ghana's test was quick.

"The problem I have with this is that the same test that was done in Ghana had already been conducted in Germany and the result was the same. Doing the same test twice was something I was angry about. The test done in Germany cost €120 and in Ghana it cost $150, and this is double payment for a student like me,” he said.

Another passenger who had been out of the country since February due to the COVID-19 restrictions, Mr Yang Inn, said he was not really worried about the cost, saying returning was the most important thing at the moment.

Although he is Chinese, Mr Yang said he was a resident of Ghana and was aided to return by Ghana's Embassy in Spain.

A walk through Terminal Three, the centre of attraction at the KIA, indicated that most of the businesses were still closed, in spite of the reopening of the facility.

Although some car rental companies, banks and restaurants were opened, majority of the shops at the lounge were closed for business during the time of the visit.

Some of the attendants at the few shops which opened said although the reopening of the airport was welcome news, patronage was very low.

The Country Manager of Asky Airlines, a regional airline operator, Mr Worlanyo Afadzinu, welcomed the reopening of the KIA for commercial flights, saying "Accra is one of our biggest markets in Africa".

He said the Lome Airport, which is the airline’s base, opened earlier last month, but
“we will start scheduled flights from Accra on Friday”.

He said the airline had already released flight schedules into the system and all its retail points could now have access to the schedules for ticketing and other purposes.