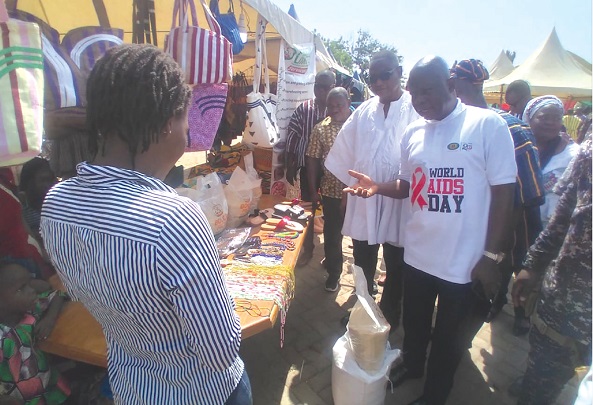 Stephen Yakubu (right), the Upper East Regional Minister, interacting with an exhibitor during a visit to the fair
30.5k Shares

The eighth edition of the Bolgatanga International Craft and Arts Fair (BICAF) has ended, with a call on the exhibitors to team up with relevant stakeholders to improve on locally made artefacts for export.

The Upper East Regional Minister, Stephen Yakubu, who made the call, said the region was well-noted for the production of a number artefacts which, if well packaged and improved upon, would enable the region to generate enough revenue to boost the local economy.

He said the Regional Coordinating Council (RCC) was ready to partner the private sector and other relevant bodies to market the tourism potential of the region to attract the needed investment towards the transformation of the region.

The BICAF was to enable artisans to showcase locally made products to buyers within and outside the region.

The five-day fair, held at the Bolgatanga Jubilee Park, brought together about 50 exhibitors who showcased products such as textiles, food items, baskets, beads and agro products.

The fair, organised by Trade Aide, a non-governmental organisation with focus on enterprise development, was on the theme: “Working together to unlock the investment potential of the Upper East Region through arts and craft”.

In a speech read on his behalf, Mr Yakubu said the Upper East Regional Administration was ready to collaborate with agencies, either public or private, to work to propel the development agenda of the region to reduce the high level of poverty in the area.

He indicated that the region was endowed with a lot of natural resources, including gold, water bodies, arable land and human resource, saying “harnessing this potential efficiently and effectively is key to the growth and development of the region”.

“If we come together and take advantage by putting to good use the numerous resources with which the region is endowed, it will enable us to develop, thereby removing the negative tag as the poorest region among the five northern regions,” the regional minister added.

Mr Yakubu said the region had enough agricultural resources to feed itself and export the rest to neighbouring Burkina Faso, Mali, Niger and Togo.

The Executive Director of Trade Aide, Nicholas Apokerah, told the Daily Graphic at the end of the fair last Sunday that it achieved its aim of giving opportunity to the business community to exhibit their products to potential buyers.

He noted that since the region was among those with high poverty levels, entrepreneurship was essential to create jobs to improve the lives of the people.

He cited the recent Ghana Living Standards Survey report which put poverty in the region at 54.8 per cent, far above the national average of 23 per cent, and said “one of the ways to change the narrative is through trade and enterprise development”.

Mr Apokerah disclosed that at the next edition of the fair, an investment forum would be organised, where potential investors would be invited to share information on the investment opportunities in the region in a bid to woo them to invest in the area.