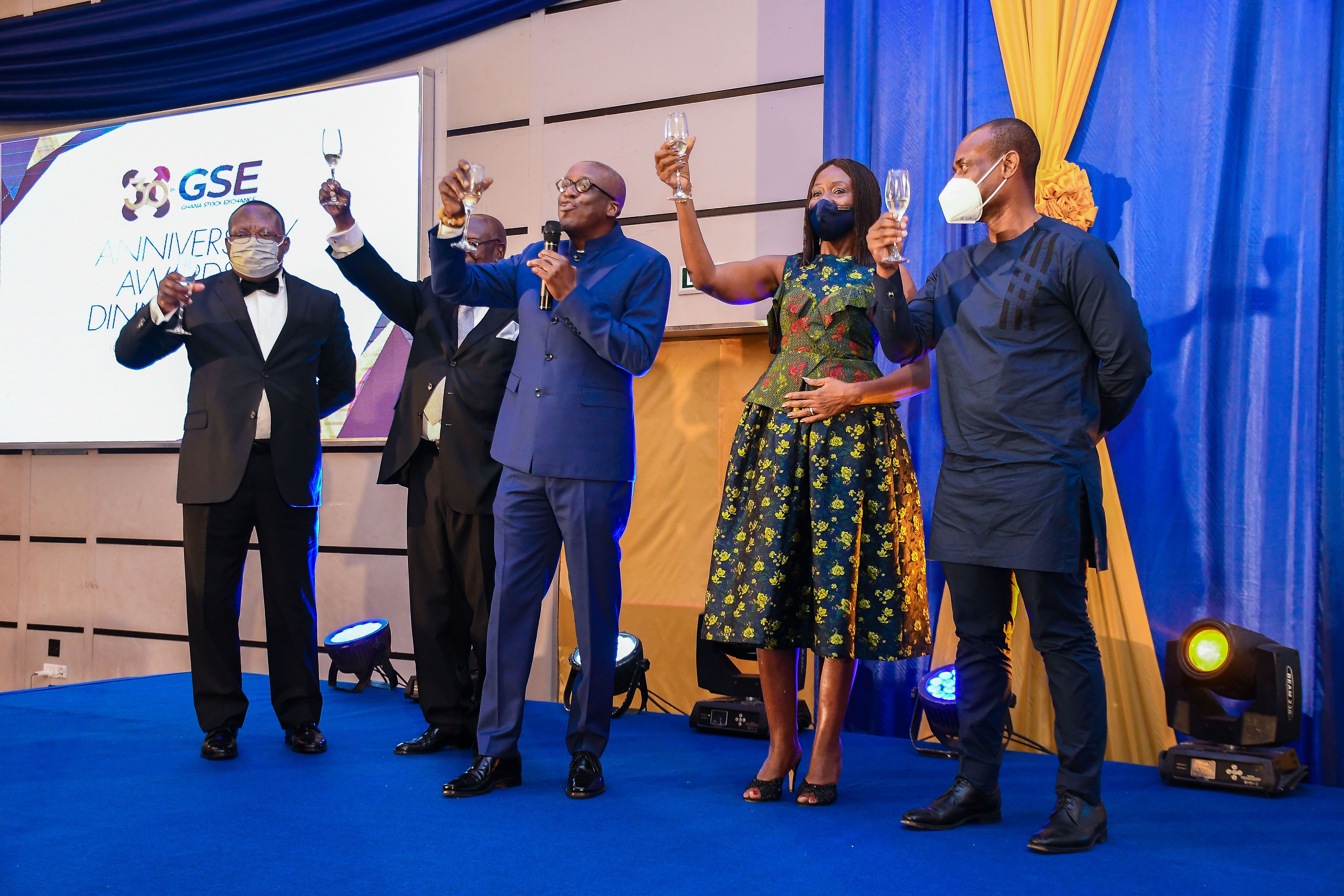 The Ghana Stock Exchange (GSE) has celebrated various stakeholders at its 30th anniversary awards and dinner night, which was rescheduled due to COVID-19 last year.

Long-serving staff and various stakeholders who have contributed in diverse ways to the growth and the development of the Exchange received several awards.

The awards ceremony was graced by the Minister of Finance, Mr Ken Ofori-Atta and was well attended by players in the capital market and financial sector space, Securities and Exchange Commission (SEC), Chief Executive Officers of listed companies and licensed dealing members, current and former captains of industry, Council and Staff of GSE.

The theme for the ceremony was “30 years of Ghana Stock Exchange in Ghana: The prospects for the Next Decade”.

The theme sought to highlight the history of the Exchange with the various milestones, challenges, and the prospects for the next 10 years as capital markets continue to evolve with new products introductions, digitalisation and integration at the regional level.

There were two broad categories for the awards comprising of stakeholders and long-serving GSE staff.

The stakeholder awards were in three categories including those who contributed immensely to the establishment and development of the Ghana Fixed Income Market (GFIM), Companies and Stockbrokers that listed first on the GSE, and special awards to individuals whose contributions have helped to develop the capital market.

Among some of the recipients were Mr Ken Ofori-Atta; Founder of the SAS Finance Group, Togbe Afede XIV; first Managing Director of GSE, Dr Yeboa Amoa, for their enormous contribution to the development of the capital market over its three decades history.

Speaking at the event as the Special Guest, the Minister of Finance, Mr Ken Ofori-Atta said the role of the GSE was so crucial in this economy as it provides the platform for companies to raise long-term capital to finance their growth which supports national economic development.

He commended the GSE for recognising individuals and institutions who have supported the growth of the Exchange and the capital market.

In his remarks, The Director General of the Securities and Exchange Commission, Rev Daniel Ogbarmey Tetteh said, GSE needed commendation for recognising active and past industry players for their various roles in growing the capital market.

The journey of trading started at the Exchange on the 12th of November 1990 and the Exchange has since evolved to become one of the best performing in Africa with its landmark automation program in 2009 and the award winning initial public offering of MTN Ghana with the innovative use of a ‘mobile money’ platform.

The Managing Director of the Ghana Stock Exchange, Mr. Ekow Afedzie said the Exchange had chalked a number of milestones including but not limited to, Automated Clearing & Settlement System in 2008; Creation of Ghana Alternative Market for SMEs in 2013; Merger of GSD of GSE and CSD of Bank of Ghana in 2014; and Creation of the Ghana Fixed Income Market in 2015, among others.

He added that the Exchange’s ambition in its three-year strategic plan was to become the preferred platform /leader in the provision of financing and investment for both public and private sectors; transform from a frontier market into an emerging market and be recognized as the preferred entry port market into the West African Exchange market, and to become a demutualized entity operating at optimal capacity with an innovative and a commercial orientation.”