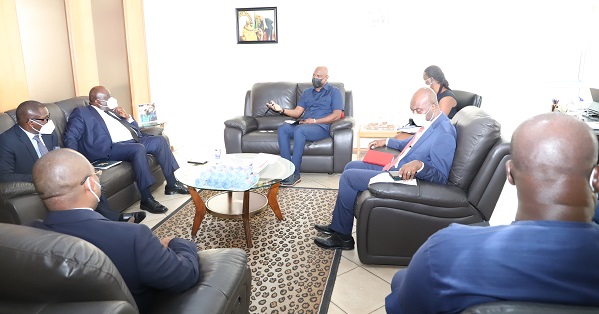 The Graphic Communications Group Limited (GCGL) and the GCB Bank will forge stronger collaboration in the coming years for mutual benefits and to help propel national growth.

Both companies agree that collaborating more is the way to go for them as state-owned institutions as they seek to build their various businesses.

“Partnerships like this would be very useful. You are the most dominant media institution in the country and I think, we coming from the same mother, it is important that we cooperate and collaborate in business and social events,” Mr Adomako stated.

He said the purpose of his visit was to first introduce himself as the new MD of GCB Bank and also to get to understand the business of the Graphic Group and see ways in which the bank could support the company.

“We want to understand where you want to go and want to be your go-to bank, and help you to get where you want to. Just as our industry is evolving, the media industry is also evolving very fast and we want to find out your strategies to take this business to the next level and see how we can support that strategy.


“We want to play a role in making sure that you get there. More importantly, there are also things that we can look at together and you can also help us disseminate what GCB wants to do along our various businesses,” he said.

Mr Adomako indicated that banking was changing very fast and was even going to change more in the coming years.

“The disruption with COVID-19 and what has happened forced banks to get more digital to reach their customers. So those days when we had armchair bankers who sat in the office and waited for the customer to queue outside are long gone and it will even change more in the coming years,” he explained.

He said that was one of the reasons why he was reaching out to the GCGL, which was one of its customers, to find out how the bank could be of help to the company in the coming years.

“This was on my agenda from the first day I walked into the bank and I listed the customers that I had to see, and Graphic was one of them,” he stated.

In his response, Mr Afful said the company had enjoyed a fantastic relationship with GCB Bank over the decades, with the bank being immensely helpful.

“As an ongoing relationship, we will obviously be looking at upping the ante on both sides. We appreciate the services that you have rendered to us over the decades,” he stated.

Mr Afful said the GCGL recognised the fact that times had changed and, therefore, the company had rolled out several initiatives to ensure that the business remained sustainable.

“We recognised that and so there was a shift but that shift did not evolve in a way that it should have. We migrated digitally and it started growing at a reasonable pace but we also looked at the strategic level and realised that digital was not supposed to add on but be at the core of the business.

“The constant in the new model was accurate news but the channels of dissemination would have shifted and the way the consumer is behaving is also different. In the new era, seven seconds of a reader’s time is all we are getting at an average, so we realised all these changes and said it is rather a digital first strategy and not the other way round,” he said.

Tapping into other opportunities

Mr Afful also noted that the company had over the years looked at how it could stretch the brand to tap into other opportunities.

“Graphic is now doing thought leadership programmes in partnership with other stakeholders. Additionally because of the traditional base of print, the leaders of this business over time saw it fit to venture into the printing and publishing, packaging business which led to the establishment of the subsidiary company GPAK, he said.”

He said the GCGL also partnered another company to establish a courier services company that was into nationwide delivery.

“The company also, through partnership, has renovated and expanded its clinic which used to serve only staff and family to now serve the entire public,” he stated.

Furthermore, he said the company had some physical assets that it intended to develop and was therefore in discussion with some partners in that regard.

Mr Afful said all those new interventions were aimed at increasing the revenue of the company.