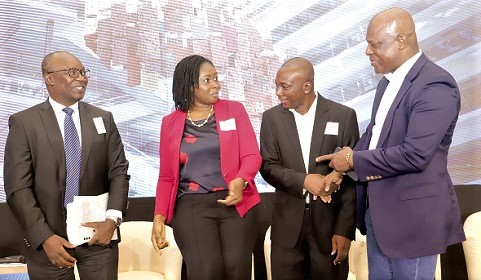 An Economist and Professor of Finance at the University of Ghana, Godfred Bokpin, has called for the abolition of the electronic transfer levy (E-Levy).

“Let’s not look at tax only as an instrument of collecting revenue for the state; tax in itself can be conceptualised as an investment to grow a particular industry or emerging area before you start deriving dividend from that.

“So even if the E-Levy won’t be abolished completely, it should be reduced considerably. If you look at the countries that are accommodating digital-based investments in Africa, Ghana is not in the top four,” he added.

Prof. Bokpin made the call at the Graphic Business/Stanbic Bank Breakfast Meeting at the Labadi Beach Hotel in Accra yesterday.

The meeting was on the theme: “17 Times too many! What should we stop doing and start doing as a people?”


The theme for the thought-leadership meeting was in reference to the country approaching the International Monetary Fund (IMF) for a bailout for the 17th time, which means it re-entangles itself in economic challenges shortly after completing an IMF programme.

Prof. Bokpin also said there was no need to introduce new taxes in the 2023 budget, despite the challenges of the government to raise money from external sources.

He said although the country’s tax-to-Gross Domestic Product (GDP) ratio was low, compared to its peers on the continent, the issue had more to do with compliance and not policy.

“Our tax-to-GDP ratio is less than 13 per cent, so considerably one would logically suggest that we introduce new taxes. But I will say no. If you look at our tax potential, we can do between 24 and 25 per cent of GDP,” he said, and attributed the shortfalls to gaps at the administrative and the compliance levels.

Prof. Bokpin said to close the gap, there was the need to look at the implementation arrangement surrounding VAT.

“If you pick direct income tax, just about 2.4 million pay that, out of an estimated 13.7 million labour force. The way to close that is through efficiency,” he said.

Prof. Bokpin also wondered why it took the managers of the economy such a long time to approach the Bretton Woods institution for support, saying: “The right time to have approached the fund was in the last quarter of 2021.”

He said the country had, over the years, sought support from the IMF due to fiscal indiscipline leading to unsustainable debt levels, rising inflation, a depreciating currency and high interest rates.

An economist and Senior Lecturer at the University of Ghana, Dr Priscilla Twumasi Baffuor, who chaired the meeting, said data suggested that since independence, the country’s appeal for IMF-assisted programmes had been in a cycle of four years, adding:

“We know what to do, as a people, to stop going back to the IMF.”

“We need to build resilience in the economy through an aggressive import substitution industrialisation drive,” she said.

She said although it was important to appeal to the citizenry to patronise made-in-Ghana goods and build local industries, leadership needed to show the way.

“Economic agents respond to incentives; if policies are used to restrict non-essential imports, while at the same time promoting local production at competitive prices, people will respond by moving into production, instead of importation,” Dr Baffuor added.

For his part, the Greater Accra Chairman of the Association of Ghana Industries (AGI), Tsonam Cleanse Akpeloo, said about 70 per cent of items used in the country were imported

“What we need now is a strong productive economy that is highly industrialised and allows the citizenry to participate in production and consume what we produce,” he said.