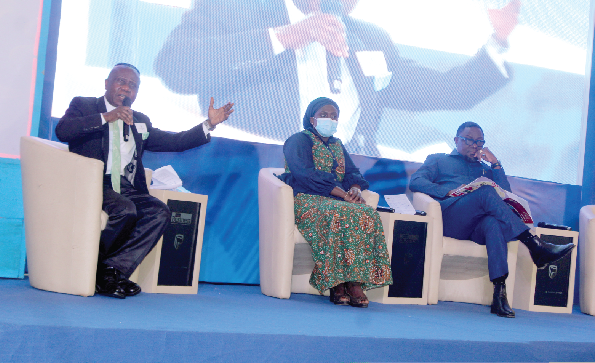 Last Tuesday, the third quarter of the Graphic Business/Stanbic Breakfast Meeting came off on the theme: “Living Within Our Means: Imperative for Economic Success.”

Attracting more than 100 participants from the business community, academia, civil society and think tanks, the thought leadership event, which has grown to become one of the main forums in the country’s calender to discuss issues of national importance, was primarily to gather critical insights ahead of the preparation of the 2023 Budget and Government’s Economic Policy.

The Director of Research at the Institute of Economic Affairs (IEA), Dr John Kwakye, said it was necessary for the country to live within its means because it was an important guiding principle which would help avoid financial crisis.

Speaking on the topic: ‘Discipline to Live Within Our Means as a Country and Implications for External Borrowing – Drawbacks and Way Forward,’ he said over the years, the country had been recording huge budget deficits which had been the root cause of the fiscal mess in which it found itself.

He pointed out that the country had a long history of high fiscal deficits, which dated as far back as 2010.

“So for this entire period, 2010 to 2021, Ghana has consistently recorded much higher fiscal deficit than the other countries in the region and this is what has led to the huge public debt.

The renowned economist noted that for the country to effectively live within its means, the government must put in place measures to boost domestic revenue.

“As a country, our total revenue is just about $12 billion, so if we have to live within our means, then we must spend either up to that amount or not too higher than that; but that is not enough. Twelve billion dollars is peanut for a whole country,” he pointed out.

He said the country was not collecting enough taxes.

“I am not talking about increasing the tax rate. There are loopholes in our tax system that we need to plug, such as tax exemptions, property taxes, trade mis-invoicing and administrative inefficiencies,” he stated.

For the country to effectively live within its means, he said, the government should be able to mobilise about US$20 billion in revenue annually.

Speaking on the topic: “Sustain Growth by Financing the Real Sectors While Cushioning the Vulnerable,” Hamdiya Ismaila of the Venture Capital Trust Fund also said for the country to be able to live within its means, it was necessary to widen the tax net to capture a lot more people.

She said it was also necessary for the financial industry in the country to provide capital for small and medium enterprises which had the potential to grow and employ more people.

Ms Ismaila also called for reforms in the country’s financial sector to enable it to lend more support to Small and Medium Enterprises (SMEs).

From industry (manufacturers), the President of the Association of Ghana Industries (AGI), Dr Humphrey Ayim-Darke, who spoke on the topic: “Achieving Self-Sufficiency, Role of the Private Sector” said another way for the country to increase its revenue base was through industrialisation.

The Chief Executive Officer (CEO) of Stanbic Bank Ghana, Kwamina Asomaning, said the country needed to be honest with itself when making decisions on the economy.

He said ranked according to the country’s Gross Domestic Product (GDP) per capita, Ghana was not the wealthiest of nations, therefore, that must be considered when making decisions.

“Ranked according to our GDP per capita, our country is not the wealthiest of nations so we must be acutely better at mechanising our trade-offs than those nations ranked as wealthier than ourselves. The idea of trade-offs is one of the most basic principles in economics; in order to have more of one thing, we must accept having less of something else,” Mr Asomaning said.

He explained that there was nothing wrong with challenging what had evolved into the status quo, if that status quo had the potential to lead us down a thorny path.

The Managing Director (MD) of the Graphic Communications Group Ltd, Ato Afful, in his welcome address called for a national reorientation to ensure that policies proposed to transform the economy were implemented to the letter.

Mr Afful said while the country was awash with brilliant ideas and plans, the leaders lacked the will to implement them.
’
“We must resolve to make a choice to take a chance for our lives to change,” he stated.