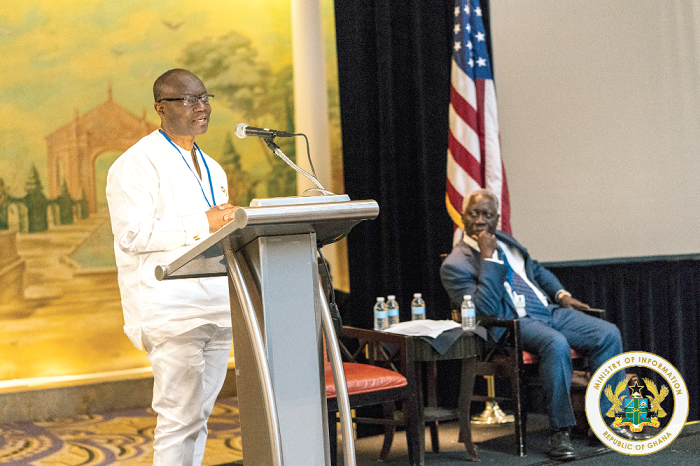 The government is on a roadshow to raise $2.5 billion through a bond issue to clear arrears owed banks by state-owned electricity and petroleum utility companies.

A deputy Minister of Information, Mr Kojo Oppong Nkrumah, said in a message to the Daily Graphic that the transaction advisor, Temple Investment, had done a lot of work in the background to whet investors’ appetite for the country’s energy bond.

The Ghanaian delegation, led by Senior Minister Mr Yaw Osafo-Maafo, the Finance Minister, Mr Ken Ofori-Atta and other senior government officials, including the spokesperson for the team, Mr Oppong Nkrumah, was in New York to sell the energy sector bond to investors, after they had attended the International Monetary Fund (IMF) and World Bank annual meetings in Washington DC in the United States of America (USA).

“The process began with the selection of the transaction advisor who has been doing all the work behind the scenes,” Mr Oppong Nkrumah said in a text in response to enquiries by the Daily Graphic.

“Yes, the total bond is the cedi equivalent of about $2.5 billion.

This is aimed at resolving the various issues in the energy sector, which have led to intermittent power supply and high tariffs, as well as provide liquidity to the banking sector,” he stated.

The stock of non-performing loans at banks was GH¢8 billion as of June 30, according to Bank of Ghana data.

The three major power utilities, Electricity Company of Ghana (ECG), Volta River Authority (VRA) and Ghana Grid Company (GRIDCo), had GH¢ 7.7 billion in payable loans at the end of 2015, according to the IMF.

The government plans to boost the ability of the banks’ to lend and strengthen the financial industry as part of an agreement under an IMF extended-credit facility programme with the country.

Mr Ofori-Atta was quoted by an international newswire, Bloomberg, as saying that the sale was the first tranche of a plan to sell as much as GH¢10 billion cedis in bonds through a special-purpose vehicle and backed by a tax on the sale of petroleum products.

He said the debt would carry a maturity of no longer than 10 years.

“We will do the first tranche, size up the market and then come back. You don’t necessarily need to do all the 10 billion cedis right now,” he told Bloomberg.

The government has already appointed Fidelity Bank and Standard Chartered Bank as lead managers for the issuance of the Energy Sector Levy Act (ESLA) bond. The banks are expected to raise GH¢10 billion.

There are, however, concerns that the lack of a sovereign guarantee for the bond may hamper its success.

Investors will have to seek more assurances from the government that successive governments will continue to allocate energy sector levies to the special purpose vehicle.

But the IMF has said Ghana remains at a high risk of debt distress as the country plans to clear arrears owed by energy utilities through the sale of a GH¢10 billion cedi ($2.5 billion) local-currency bond.

Ghana has struggled to tame its national finances with help from a $918 million IMF programme set to end next year.

There are worries that the government has not been able to match its expenditure with revenue and has resorted to borrowing and adding to the public debt.

Provisional fiscal data for the first seven months of the year show that total revenue and grants amounted to GH¢20.8 billion, which is 10.3 per cent of GDP, compared with a target of GH¢24.0 billion or 11.3 per cent of GDP.

The country’s debt-to-GDP ratio is expected to decrease to 66.1 per cent by the end of 2018 according to a projection captured in the fiscal monitor report released by the IMF.